Sales of existing houses grew at a faster-than-expected pace in May after a larger-than-reported decline in April. The National Association of Realtors reported an annual rate of more than 5.6 million houses sold last month, up 1.1% from April’s rate and 2.7% higher than May 2016. Citing continued employment strength and low mortgage rates, an economist for the trade group said demand remains steady, but he warned that low inventories have been pushing up prices at unsustainable rates. The median house price rose to the highest level in six years of data, up 5.8% from May 2016 for the 63rd consecutive year-to-year increase.

Employers continued to be reluctant to let workers go, as indicated in the moving four-week average for initial unemployment claims, which rose for the fourth consecutive week but remained around low levels set four decades ago. According to data from the Labor Department, average claims were 32% below the 50-year average level, which it has been below each week since early 2013. 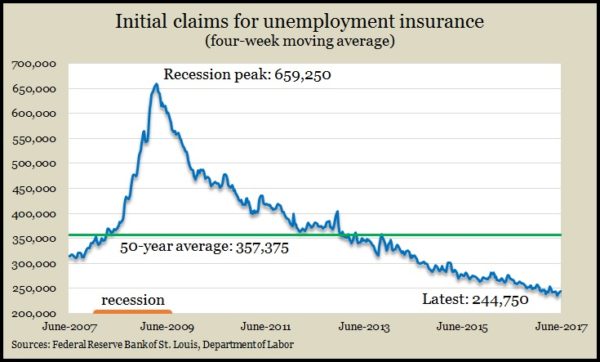 As analysts expected, the index of leading economic indicators rose 0.3% in May, following a similar gain in April. The Conference Board said its index showed broad support across the economy for continued moderate growth with GDP expanding at or slightly faster than a 2% rate the rest of the year.

As further evidence of the ongoing housing expansion, new home sales rebounded 2.9% in May, beating analyst expectations as well as the year-ago and 12-month average sales rates. While still trending below long-term levels, the annual pace of new sales suggests continued demand for housing. The Commerce Department report showed the median price for a new house gaining 16.8% from May 2016, indicating a continued low supply of houses for sale.