The U.S. housing industry picked up pace in August. Both housing starts and building permits accelerated, though both remained below recent 15-year highs. The annual rate of housing starts was up nearly 4%, but initiations of critical single-family houses declined almost 3% from July, the third drop in a row. Permits rose 6% from their pace in July to the highest rate in four months. Single-family permits were little changed after four monthly declines, according to Commerce Department data. However, completions of single-family houses rose for the second month in a row, hovering around levels last seen in 2007. 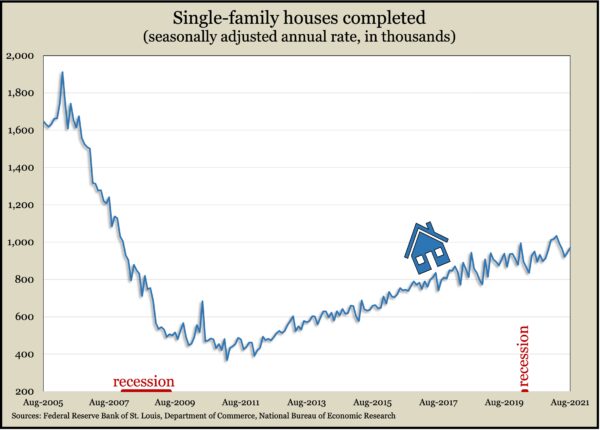 The annual rate of existing home sales fell 2% to 5.9 million in August, the second decline in three months and 1.5% below the year-ago pace. The National Association of Realtors said an ongoing lack of inventory continued to raise prices, causing an unbalanced market. The number of houses for sale dropped 1.5% in August to a 2.6-month supply, less than half of what economists have considered as sustainable. The median sales price of $356,700 was up 14.9% from August 2020, marking the 114th consecutive year-to-year increase in prices.

Labor market conditions continued improving as the four-week moving average for initial unemployment claims declined for the sixth week in a row, reaching 10% below the all-time average. Data from the Labor Department showed the moving average of 335,7000 new applications was still 60% above where it was just before the pandemic but down from a record 5.3 million in April 2020. In the latest week, 11.2 million Americans were receiving jobless benefits from one program or another, down 7% from the week before. About 75% of the claims were through expiring pandemic relief programs.

The Conference Board’s index of leading economic indicators rose 0.9% in August, advancing from gains of 0.8% in July and 0.6% in June. The business research group said the delta variant of COVID-19 as well as inflation concerns could lower the economy’s “rapidly rising trajectory” in coming months, but it continued to project robust growth rates of 6% in 2021 and 4% in 2022.