U.S. manufacturers contracted for the second month in a row in September, according to the Institute for Supply Management. The trade group’s manufacturing index sank to its lowest reading since June 2009, just before the end of the recession. Only three of 18 industries surveyed reported expansion. Respondents noted disruptions from trade concerns. Exports orders shrank for the third consecutive month.

The Commerce Department said construction spending grew at an annual rate of $1.29 trillion in August, the 39th month in a row above the 2006 peak. The pace was up 0.1% from July but 1.9% under the year-ago pace. A rise in residential and government spending helped boost the construction industry both monthly and year-to-year. Private-sector construction expenditures declined.

The annual sales pace of motor vehicle sales rose 1.1% in September, reaching 17.2 million cars and light trucks, according to data from the Bureau of Economic Analysis. The sales rate accelerated for the second month in a row but was 0.7% behind the pace of September 2018. Accounting for about one in five total retail sales dollars, car sales suggest continued consumer spending, which drives more than two-thirds of the U.S. economy.

Growth in service-sector businesses slowed in September to its lowest pace since August 2016, according to the ISM Non-Manufacturing Index. Amid the 116th consecutive month of expansion for the largest segment of the U.S. economy, purchasing managers surveyed suggested concerns about trade tensions, labor supply and the direction of the economy. The trade group said its index suggests that U.S. gross domestic product is growing at a 1.4% annual rate.

The four-week moving average for initial unemployment claims was unchanged after three consecutive weeks of decline. The measure of job losses remained near 50-year lows and has been under the 52-year average each week since 2013, according to Labor Department data. The persistently low level of jobless claims is evidence that employers are reluctant to let workers loose in a tight hiring market.

In another sign of trouble in manufacturing, the Commerce Department reported that factory orders shrank 0.1% in August and also were 0.1% below year-ago levels. A fall in orders for commercial aircraft were offset partly by military orders. Orders for non-military capital goods excluding aircraft—a measure of business investments—rose 0.5% for the month and gained 2.7% from August 2018.

Employers added 136,000 jobs in September, adding to a record 108th consecutive month of payroll expansion, according to the Bureau of Labor Statistics. Revised estimates showed employers adding 45,000 more jobs in July and August than previously reported. Average wages rose 2.9% from the year before, the first month below 3% since last November. The bureau’s separate survey of households estimated unemployment at 3.5% of the labor force, the lowest since December 1969. 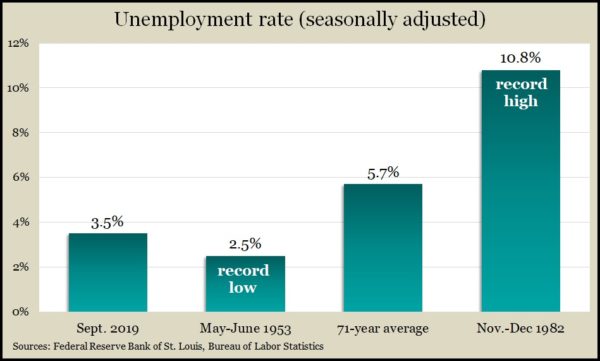 The U.S. trade deficit widened 1.6% in August to $54.9 billion. According to the Bureau of Economic Analysis, the value of exports rose 0.2%, including gains for fuel oil and automobiles. Imports rose 0.5%, led by a record high import of consumer goods, including cellphones.