U.S. auto dealers sold fewer vehicles than analysts expected in October. The Bureau of Economic Analysis said an annual rate of 16.5 million vehicles sold, down 3.4% from the pace in September and 5.3% lower than October 2018. Light trucks, including SUVs, continued to outsell cars, accounting for a record 74% of all vehicles sold.

The non-manufacturing sector expanded for the 117th month in a row in October, according to the Institute for Supply Management. The ISM non-manufacturing index strengthened from a slowdown in September, registering faster growth in most of its components. Purchase managers interviewed for the monthly survey expressed concerns about trade tensions, geopolitical uncertainties and labor resources. The ISM said the index suggested annual gross domestic product (GDP) growth of 2.1%.

The U.S. trade deficit narrowed in September to $52.5 billion. The Bureau of Economic Analysis reported that the trade gap was down 4.7% from August. Exports declined by 0.9% led by soybeans and other food items, some of which are entangled in trade wars with China. Imports fell 1.7%, including a dip in consumer goods, which suggests possible softening in U.S. consumer spending. Year to date, the trade gap rose 5.4% based on a 0.4% fall in exports and a 0.8% rise in imports.

U.S. employers had just over 7 million job openings in September, down 3.8% from August and down 5% from September 2018. It was the lowest demand since March 2018. The Bureau of Labor Statistics said the number of Americans hired in September rose 0.8%, resulting in the narrowest gap between openings and hires since early 2018. Another sign that strong labor indicators may be starting to weaken was a 2.9% dip in the number of workers quitting their jobs. For the 18th month in a row, job openings outnumbered those who are actively seeking employment. 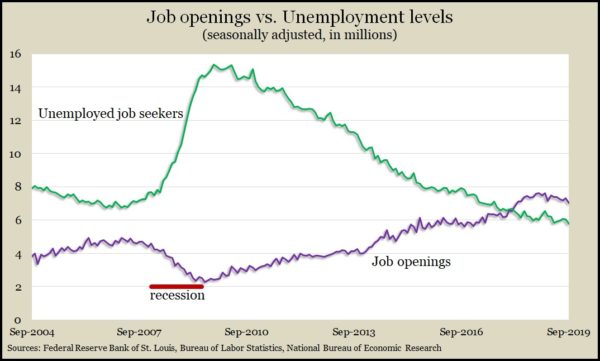 Worker productivity shrank at a 0.3% annual rate in the third quarter of 2019, according to a preliminary report from the Bureau of Labor Statistics. The setback was the first decline since the end of 2015 and resulted from a 2.1% rise in output lagging a 2.4% gain in hours worked. Compared to the third quarter of 2018, productivity rose 1.4%, compared to a 2.7% average in the 17 years leading up to the Great Recession, below the post-World War II average of about 2%. Weak productivity since the recession has confounded economists, who note that productivity must increase to raise standards of living.

In another sign of a historically strong employment market, initial claims for unemployment insurance remained near the lowest levels in 50 years. The four-week moving average rose for the first time in three weeks, staying 39% below the all-time average, according to data from the Labor Department. Employer reluctance to let workers go should continue encouraging consumer spending.

American consumers used their credit cards less in September, according to the Federal Reserve Board. Credit card debt outstanding declined by $1.1 billion, or an annual rate of 1.2% from August, the second decline in as many months. For the third quarter, so-called revolving credit rose at an annual rate of 2.2%, down from 5.2% in the second quarter, suggesting consumers are being more cautious in their spending.

A preliminary gauge of consumer sentiment suggested continued optimism in November. Based on a long-standing survey from the University of Michigan, the sentiment index declined slightly from where it ended October and neared its average for 2019. Consumers were a little more optimistic about the economy and a little less optimistic about their own financial circumstances. About one in four mentioned concerns about tariffs; hardly anyone brought up impeachment investigations.