Low interest rates, pent-up demand and rising consumer confidence continues to fuel a housing recovery. The National Association of Realtors said existing home sales rose to an annual rate of 5.35 million houses in May, the fastest pace since November 2009. Encouraging signs included greater sales of single-family houses and more first-time buyers. The trade group noted increased listings but said the number of houses for sale still is not keeping pace with demand.

Another sign of housing’s comeback were higher-than-expected new-home sales in May, which at an annualized rate of 546,000 units was the fastest level since February 2008 – before the financial collapse. The Commerce Department said new houses sold at a 19.5% faster rate than in May 2014. As with existing residences, the supply of new houses for sale remained low, which could result in more housing construction. 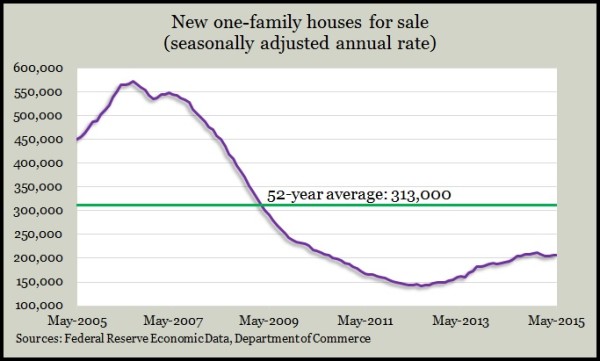 A volatile indicator of factory demand – durable goods orders – declined more than analysts expected in May. The Commerce Department reported that orders for commercial airliners dropped 49%, having an outsized effect on the total. Excluding transportation, orders gained slightly, and capital goods orders excluding military and aircraft gained 0.4%, suggesting increased business investment for the second time in 2015.

In its final estimate for the first quarter, the Bureau of Economic Analysis said Gross Domestic Product sank at an annual rate of 0.2% to begin the year, up from the previous estimate of a 0.7% decline. Extraordinary events including a snowy winter in the Northeast and settlement of a port strike on the West Coast, slowed the economy in the first quarter, as did the effects of a stronger U.S. dollar – reducing exports and raising imports. A key measure of inflation fell remained below the Federal Reserve goal of 2%.

Personal spending rose 0.9% in May, the steepest increase since August 2009, the Bureau of Economic Analysis reported. With consumer spending accounting for more than two-thirds of GDP, the boost suggested growing momentum for the economy. The gain came with a 0.5% push in personal income, which resulted in a slightly lower personal saving rate, down to 5.1% of disposable income from 5.4% in April.

The moving four-week average for initial unemployment claims fell for the second week in a row after hitting a 15-year low in mid-May, the Labor Department reported. Persistently low jobless claims – below the long-term average since early 2013 – indicate that employers are reluctant to let workers go, which can make the hiring environment brisker for job seekers.

Consumer sentiment grew faster than expected during June, completing six months of “the largest and most sustained increase in economic optimism since 2004,” according to the University of Michigan. Sentiment brightened at all income levels, whether the subject was the national economy, personal finances or buying conditions, researchers said. Economists watch consumer sentiment as a harbinger of spending.