The Federal Reserve reported that outstanding consumer debt, excluding mortgages, rose by nearly $28 billion in November. The gain was up 8.8% on an annual basis, including a 7.2% increase in non-revolving debt such as student loans and car financing. Credit card debt rose 13.3% to a new record, finally surpassing the peak hit during the 2008 financial crisis. 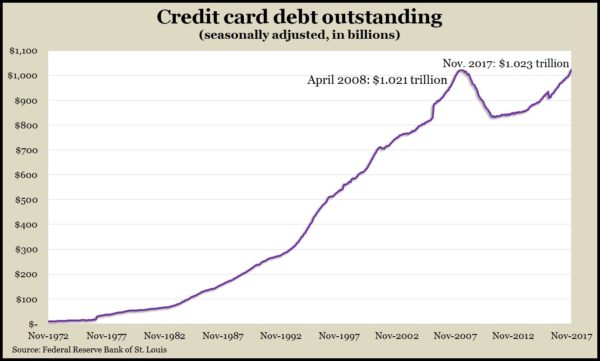 U.S. employers reported 5.9 million job openings in November, down 0.8% from October but still near record levels. The Bureau of Labor Statistics also showed slight declines in the number of hires, separations and quits, but data overall suggested a continued tight employment market, which should push up wages and fuel consumer spending.

The nation’s wholesalers continued to adjust supplies more closely to demand in November, as inventory levels declined 0.8% vs. a 1.5% increase in sales, according to the Commerce Department. The inventories-to-sales ratio, a gauge of how lean businesses are operating, fell further from its post-recession high in early 2016. Year-to-year, wholesale inventories were up 4% while sales had risen 9.8%.

Although it declined in December, wholesale inflation rose at a 2.6% annual pace in 2017, the highest in six years. Including volatile prices for food, energy and trade services, the Producer Price Index fell 0.1% from November. Excluding those prices, the core rate of wholesale inflation rose 0.1% in December, the slowest pace in four months, and increased at a 2.3% rate for the year, just above the Federal Reserve Board’s target of 2% inflation.

The moving four-week average for initial unemployment claims rose for the fourth week in a row, climbing 6.7% in the previous month, which includes volatile numbers from holiday hiring. Data from the Labor Department show new jobless applications are 30% below the 50-year average. Claims have been below average every week since the beginning of 2013, signaling employers’ longstanding reluctance to let workers go.

The broadest measure of U.S. inflation rose 0.1% in December, as expected by forecasters. The Bureau of Labor Statistics said the Consumer Price Index climbed 2.1% from December 2016, approximately the level of inflation the Federal Reserve Board has set as a sign that economic growth is sustainable. Inflation remained a bit subpar, though, when volatile prices for energy and food were excluded. In that case, the core inflation rate was 1.8%, suggesting the Fed still has room for increasing short-term interest rates.