Worker productivity suffered its first setback in four years in the third quarter. An updated report from the Bureau of Labor Statistics confirmed earlier findings that the annual rate of hours worked rose faster than output in the three months that ended Sept. 30. Comparing labor input and output with the same time last year, productivity rose 1.5%, below the 2.7% average leading up to the Great Recession as well as the 2% average since World War II.

The broadest measure of inflation stayed near the Fed’s 2% target in November. The Consumer Price Index rose a tad more than expected from October because of higher costs for gasoline and housing. The Bureau of Labor Statistics said year-to-year inflation was up 2.1%, the highest since November 2018. The core measure, excluding volatile energy and food prices, rose 2.3% year-to-year, unchanged from October.

The moving four-week average for initial unemployment claims rose for the first time in three weeks, still hovering 36% below the 52-year average. Labor Department data suggest a persistent reluctance by employers to let workers go in a tight labor market, which should encourage more consumer spending. Such spending accounts for about 70% of the nation’s gross domestic product.

The Bureau of Labor Statistics said wholesale inflation remained in check in November, registering no gain from October, even when controlling for volatile costs for food, energy and trade services. The Producer Price Index rose 1.1% from November 2018. The less-volatile core inflation rose 1.3% year-to-year, the third consecutive monthly decrease and the lowest rate since September 2016.

November retail sales rose less than analysts expected with six of 13 retailer categories increasing revenue from October. With consumer spending accounting for the bulk of economic output, the Commerce Department retail sales report suggests a modest boost to U.S. economic growth. Pharmacies, clothing stores and restaurants were among the decliners. Year-to-year, retail sales rose 3.3%, shy of the long-term average of 4.3%. Online sales continued to trend up, gaining 11.5% from November 2018. 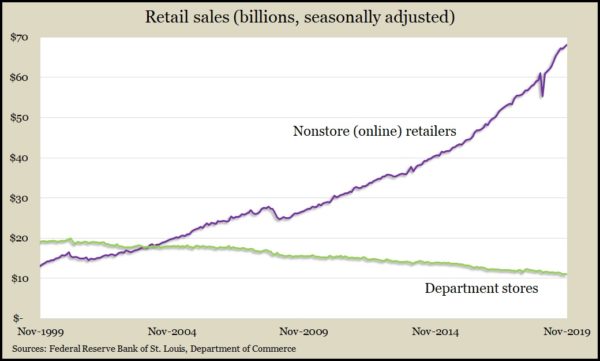 In a sign that companies continue to be challenged by slow demand, business inventories outpaced sales in October. Stockpiles rose 0.2% from September while sales declined 0.1%, the Commerce Department reported. Year-to-year, inventories rose 3.1% vs. a 0.1% decline in sales. The ratio between inventories and sales remained as high as it was at the end of the Great Recession.