In an indication that U.S. consumers may be easing up their embrace of the moderately growing economy, the Federal Reserve announced that revolving credit card debt barely budged in October. Student loans and vehicle financing continued to drive up overall outstanding consumer credit, which has risen every month for five and a half years. But revolving debt associated with credit cards advanced only slightly in its seventh consecutive month of increases. More than two-thirds of the U.S. economy driven by consumer spending. 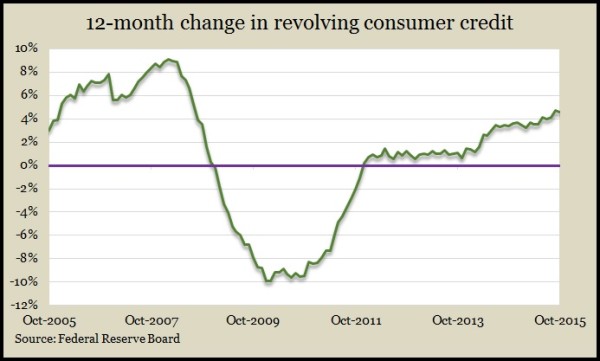 Employers kept U.S. job openings near record levels in October. The Bureau of Labor Statistics reported that the number of advertised openings reached 5.4 million, down slightly from September but up 11% from the year before. Employer demand should help address a slack in the labor force that economists blame for holding back wage increases. The report also suggested workers were not gaining confidence in their chances for leaving for a better job, with the so-called quit rate staying unchanged for the seventh month in a row.

The Commerce Department said wholesalers decreased inventories in October while their sales were unchanged from September. Year-to-year, though, inventories rose 3.6%, compared to a 3.7% decline in sales. The tell-tale inventories-to-sales ratio remained at the highest level since the recession, suggesting a mismatch between supply and demand that could hamper production and employment growth in coming months.

The moving four-week average for initial unemployment claims rose for the fifth time in six weeks after dropping to the lowest level in nearly 42 years. Jobless applications filed with the Labor Department have remained below the 48-year average every week since early 2013, suggesting persistent reluctance by employers to part with their workers. In an annual anomaly, Wisconsin reported more new claims filed than any state for the last week of November. The surge in filings coincides with Thanksgiving and deer hunting, when some operations shut down temporarily and some seasonal businesses traditionally go on hiatus.

In yet another sign of global economic slowing, prices at the wholesale level took another year-to-year dip in October. The Bureau of Labor Statistics said the Producer Price Index rose 0.3% from September, the first gain in four months and only the fourth gain all year. But the measure from 12 months earlier slipped 1.1%, which was the 11th consecutive month at or below zero. Weak demand on commodities worldwide have been keeping wholesale prices low and inflation a non-factor.

Similar to the wholesaler report on Wednesday, business inventories also continued to outpace sales, suggesting businesses are overestimating demand for their goods. To the degree businesses want to run lean, the inventories-to-sales ratio indicated the fattest conditions since the recession in 2009.

American consumers stepped up their spending by less than analysts expected in November. The Commerce Department reported that retail sales rose 0.2% for the month and only 1.4% in the last 12 months, vs. a year-to-year rate of 1.7% in October and a historical average of 4.4%. Of 13 categories, eight reported higher sales for the month. Gas stations continued to lead decliners because of lower gas prices.

A preliminary read of consumer sentiment from the University of Michigan suggests Americans remain fairly confident about their personal finances and buying plans but less sure of prospects for the economy. Current conditions gained in consumers’ minds while future expectations declined slightly. The index average so far in 2015 is the highest since 2004 and the 11th highest in 50 years of surveys. Economists consider consumer confidence a leading indicator of consumer sales.