After peaking in October 2007, the stock market bottomed out during the Great Recession and the subsequent financial collapse and didn’t recover until March 2013.

Since then, the bellwether Dow Jones industrial average has hit record highs more than 30 times, which has led some investors to worry that the market is about to fall again.

“A lot of people are a little fearful strictly because the market has risen so far,” Marc Amateis, vice president at Landaas & Company, said during a recent Money Talk podcast. “We’re hitting new highs, and a question that I’ve been getting from clients is, ‘How much farther can this go? Should I dial back my stock exposure? Should I put some money in cash? It can’t keep going. It’s just got to go down.’”

“There’s this implied idea that we’re at a top and that we can’t go any higher,” Brian said. “There certainly are some reasons to be careful, but we don’t know. The fact that we crossed a threshold from a few years back, the fact that we may be in record territory, it doesn’t mean this is the end.”

Don’t just watch the prices, put them in context.

“When you look at valuations and how much stocks are actually worth, the market really doesn’t look overvalued,” Marc said. “Those are the kinds of things people need to focus on.”

“That would tell me that there’s some tail wind here,” Steve said.

A closer look at other indicators also suggests that stocks are not yet peaking. Markets don’t die at fair value but at excess.

“When we look at some of the metrics behind the market: price-earnings ratio, price to-book, price-to-sales, price-earnings divided by growth rates – those numbers are just nearing average territory,” Marc said. “They’re really not close to the excessive levels that you usually see at market tops. Markets don’t peak out normally at average metrics.” 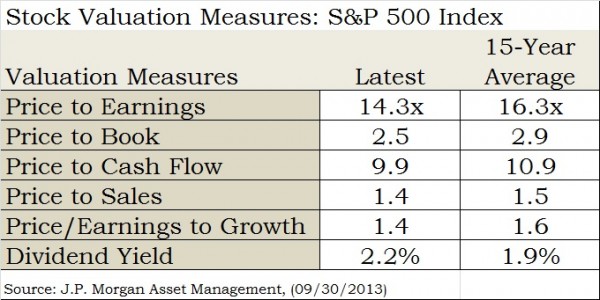 By some measures, the stock market as a whole might be approaching normal valuations, but Brian pointed out that prices in certain segments of the market still remain below long-term averages.

“That speaks to being selective in your stock picking,” Brian said. “We’re getting away from the last few years where things went up together, things went down together. We’re starting to see more divergence.”

(To read more about that divergence, please click here for an article by Marc Amateis on asset correlation.)