Demand for commercial aircraft lifted factory orders in September for the first time in three months. The Commerce Department reported that orders gained 1.7% from August, slightly below analyst expectations. Excluding the volatile orders for transportation equipment, the indicator showed mixed news for manufacturing, declining a smidge less than it did the month before.

The Institute for Supply Management said its non-manufacturing index for October showed increased momentum for an expansion that now has lasted nearly four years. New orders for service work slowed from the strong pace of the previous three months, but business activity took a big jump, and hiring grew brisker. All 10 industries surveyed showed expansion. Some said they were hurt by the government shutdown.

The U.S. showed continued modest growth heading into the October shutdown, according to the Conference Board’s leading economic indicators. But an economist for the business research group questioned whether the economy could maintain its pace faced with the challenges of relatively weak consumer demand, low wage growth and slumping consumer confidence.

The U.S. economy grew much faster than analysts expected in the third quarter. A preliminary estimate by the Bureau of Economic Analysis showed gross domestic product expanding at an annual rate of 2.8%, the strongest pace in a year, though still below the 50-year average of 3.1%. Personal consumption spending, which drives about 70% of GDP activity, rose by 1.5%, down from 1.8% in the previous three months and well below the long-term average of 3.3%. A key measure of inflation in the report remained under the Federal Reserve’s target of 2%. 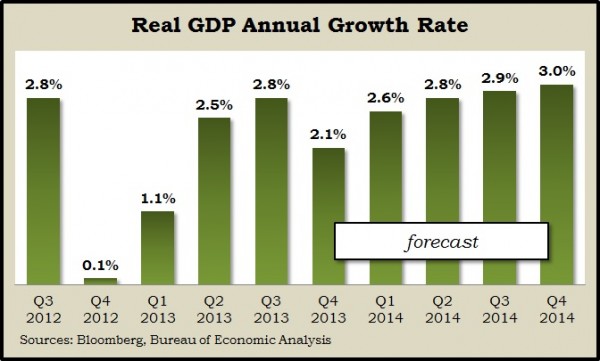 The moving four-week average for initial unemployment claims dipped for the first time in five weeks, the Labor Department reported. New jobless claims have stayed below the 46-year average throughout 2013, indicating that employers have been reluctant to let workers go.

Student loans again contributed to rising consumer credit in September, according to the Federal Reserve. Outstanding credit increased by $13.7 billion from August. Credit card debt contracted for the fourth month in a row, by its widest margin, an annual rate of 2.9%. The drop in credit card use could be a sign of falling consumer confidence.

U.S. employers added many more jobs in October than analysts had expected, especially considering disruptions from the government shutdown. The Bureau of Labor Statistics said neither delayed surveys nor federal furloughs had a material impact on the payroll report, which showed 204,000 more jobs than in September, which exceeded the 12-month average of 190,000 gains. The unemployment rate, based on separate household surveys, ticked up to 7.3% from 7.2% in September, in part because furloughed workers were classified as unemployed.

Personal spending weakened in September even while personal income rose moderately for the second month in a row, according to the Bureau of Economic Analysis. As a result, the personal saving rate rose to 4.9% of disposable income. A key inflation measure in the report suggested the economy still isn’t growing as fast as the Fed would prefer.

A preliminary reading of consumer sentiment for November showed confidence sinking for the fourth month in a row, to the lowest level since December 2011. The University of Michigan and Thomson Reuters said consumers’ expectations dropped more than their assessment of current conditions. But expectations are considered a key indication of consumers’ willingness to spend.