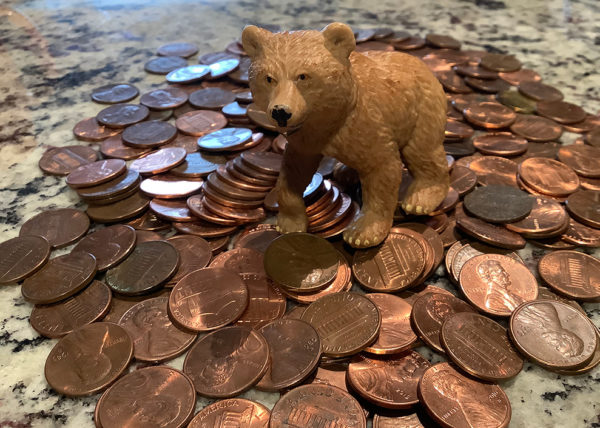 By Kyle Tetting and Joel Dresang

Shorthand terms for the broad direction of stock markets—bear and bull—get confusing with technical specifications.

Generally, a bear market begins after prices swing 20% below a previous peak; a bull market starts at 20% above a prior low. A bear signifies a downward trend in prices. A bull suggests values are rising.

Technically, the beginnings and ends, depths and breadths of bear and bull markets vary by what precisely analysts measure. There’s devilish disagreement in the details.

Many definitions of bear markets say prices have to be lower for at least a couple of months, which would suggest the March 2020 bear market was called prematurely. Some definitions consider intraday prices instead of daily closing prices. Some base the bear on prices from the Dow Jones Industrial Average, a narrower gauge of 30 stocks compared to the S&P 500.

And, technically, the S&P entered bullish territory again April 8, 2020, when it closed more than 20% above its close on March 23. The speed with which stocks entered and exited this latest bear market is unprecedented, and perhaps signals a need to look beyond a dated technical measure.

Instead, a better way to consider broad market movements, may be the measurement of cycles—from peaks to troughs to peaks. That would capture recoveries and obscure much of the noisy short-term volatility in between. By that measure, stocks are still a distance from the prior market peak but have been slowly working back to it.

For investors, the bull and bear labels matter little to long-term success. Instead, we care more about the fundamentals underlying current market conditions than what any technical metric tells us about where we are. And, long-term, those fundamentals have tended to be more positive than negative for stocks.

In fact, over the long haul, bear markets tend to be relatively brief periods far overshadowed by bull markets.

Decades of studies by Wharton economist Jeremy Siegel show stocks consistently averaging 7% per year plus inflation dating back to 1802. While long-term may not be 200 years for us, even a 10-year time horizon typically ends with positive returns for stocks. 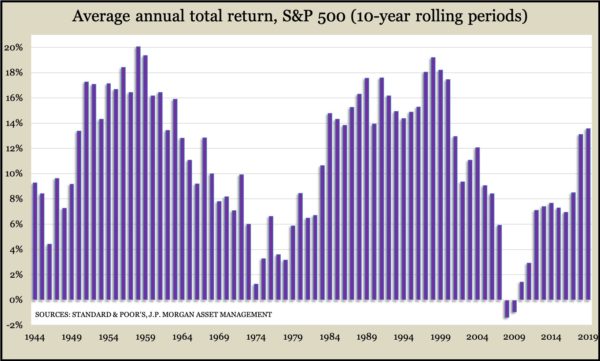 Citing research from J.P. Morgan Asset Management, Bob Landaas explained at the 2019 Investment Outlook Seminar that more times than not, stock investors profit in any given year. In fact, based on rolling 10-year periods since 1929, investors had a 98% chance of profiting from stocks. In only two of the last 75 years did those 10-year averages go negative.

“I have no idea what the market’s going to do today or tomorrow, but I do know that longer term, stocks do well,” Bob said.

As with everything, the challenge is looking beyond the most recent concerns toward the longer-term. Headlines that the S&P 500 entered a bull market may be enough to push clients into reacting if they can’t think about the long-term plan.

Learn more
Stocks: Long-term, consistent returns, a Money Talk Video with Dave Sandstrom
From peak to bear, now seeking normalcy, by Kyle Tetting
Keeping balance in unnerving times, by Bob Landaas
A note on coronavirus volatility, by Kyle Tetting
For What It’s Worth: Bulls and Bears