For What It’s Worth: Bulls and Bears 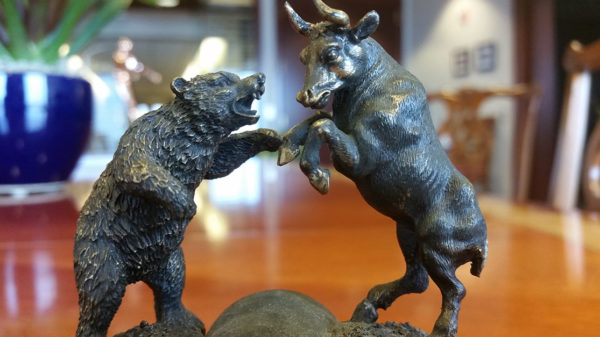 Long before John Maynard Keynes theorized about animal spirits guiding economic behavior, investors had their own spirit animals traipsing up and down Wall Street.

Since the 18th century, the terms “bull” and “bear” have described relative optimism and pessimism about the fortunes of investments. Bulls expect prices to climb; bears anticipate a drop-off.

Currently, as measured broadly by the Standard & Poor’s 500 index, investors are enjoying one of the longest bull markets in history. It began in March 2009, and is close to being the longest bull run ever.

Just as a bull market is one of rising prices, a bear market signifies a swoon, technically a fall of 20% or more from the previous peak. That’s double the dip from a mere 10% correction, which the market has been in since Feb. 8.

Etymologists aren’t exactly sure how bulls and bears wandered into investment vocabulary.

The most accepted story for why bulls came to represent buy-oriented traders relates to how bulls toss their heads in an upward motion, resembling the direction of the S&P 500 over the past nine-plus years.

An explanation for the notion of gloomy bears cashing out before stock prices fall comes from an old saying, “to sell the bear’s skin before one has caught the bear.” The expression relates to bearskin traders who would try to negotiate higher prices for their merchandise in advance of prices dropping.

So, instead of referring to sell-oriented investors as bearskin traders – or bearskin jobbers, as they were known – we simply call them bears.

Although more pessimistic, selling the skin before you catch the bear is akin to counting your chickens before they’re hatched. But what investor would want to be known as a chicken?