Guiding investors through years of changes 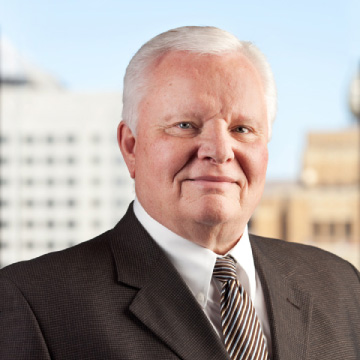 Ron Hansen has been helping investors since 1975, when information was remote, transactions cost $40 apiece minimum and few Americans saved for retirement.

After nearly 45 years in the investment profession, Ron is himself retiring. He’s ending a career transformed beyond recognition by computer technology, government policies and industry evolution. Through it all, he has prided himself on maintaining his trustworthiness, listening, being available and always advocating for what’s in clients’ best interest. “A true working relationship,” Ron calls it.

The story began with a newspaper classified ad at a point when Ron was needing a change from his job as data processing manager at a Milwaukee metal products factory. He and his wife, Colleen, had been married three years. Their daughter was 2.

When he wasn’t at work, Ron studied for the regulatory licenses needed to advise investors. Colleen called in sick for him so he could take a three-day cram course.

Once licensed, Ron joined a local firm, learning the business by day and cold-calling strangers at night: 100 phone calls each evening with the hope of getting one or two appointments. When he got appointments, he’d call their neighbors to suggest that as long as he was in the area, he might as well see them too.

Ron found people who had whole life insurance policies and explained how they could get better insurance coverage with a lower-cost term policy and then invest their savings into mutual funds. The trouble was nobody back then knew what mutual funds were or how they worked.

“You were trying to get clients comfortable with something they didn’t understand,” Ron says. Over time, though, Ron got people to meet with him, to trust him and to understand the investments. And his client list grew.

He worked on commission, and the early going was lean for Ron and his young family, which added a son. But Ron persisted. His command of the facts and his ability to convey them won clients.  Meanwhile, the world around Ron was changing.

Information accelerates. In the early days, meeting with a client meant hours of prep time calling toll-free numbers for each mutual fund company with which the client had an account to get an update on each account’s holdings. Ron got the latest balance as well as explanations for any changes in the accounts. Then, he compiled a report to present to the client—sometimes hand-written, sometimes typed. Now, of course, computer technology provides updated holdings in consolidated reports as fast as you can dial an 800 number.

Likewise, transactions executed and confirmed now electronically took days to complete when Ron began. “There was no easy way to do it except telephone and U.S. mail,” he says. “It’s a night-and-day difference.”

Responsibilities shift. In the mid-1970s, most Americans counted on employer-funded pensions and Social Security for their retirement funds. Self-funded IRAs were brand new. A few years later, 401(k)s came along, and pensions got scarce. Gradually workers have become responsible for providing for their retirements.

“People were not saving in big lumps like they do now,” Ron says.

As the popularity of mutual funds grew, Ron needed to explain them less, but he kept raving to clients about fundamental wisdoms such as dollar-cost averaging, compounding, diversification and finding safer investments for short-term money needs.

Choices proliferate. Ron figures that in 1975, fewer than 200 open-end mutual funds existed. By the end of 2018, there were 9,599, with $17.7 trillion in assets owned by 99.5 million Americans, according to the Investment Company Institute. Another $3.4 trillion were invested in exchange traded funds.

“There are a lot of ways to get your money to work now,” Ron says.

Over the years, investing has gotten easier, Ron says. Clients are more knowledgeable. Access to information and even analysis is as near as a cellphone. But the stakes are higher: The burden of funding retirement is squarely on individuals, and the array of investment options is more complex. Still, Ron is optimistic, in part because individuals don’t have to go it alone.

“For a number of months, I have been working on getting my clients to meet with the persons who will help them with their investments in 2020 and beyond,” Ron says. “It has been gratifying.”

After introductions and assuring clients that they’re in good hands, Ron lets the conversation flow and observes the clients—some of whom he has known since childhood.