The Commerce Department reported that new home sales slowed in September. The annual rate of 553,000 houses sold declined 5.5% from August and was down 13.2% from the year-ago pace. The monthly data tend to be volatile but fell for the fifth time in six months. Figures showed the inventory of new houses for sale rose to the highest level since March 2011.

The four-week moving average for initial unemployment claims was unchanged after four consecutive gains following its lowest level since 1969. Average jobless applications remain 40% below the 51-year average, according to data from the Labor Department. Filings have been lower than average every week since early 2013, a persistent sign that employers are reluctant to let workers go.

The Commerce Department said durable goods orders rose 0.8% in September, mostly because of a takeoff in defense aircraft orders. Excluding volatile demand for transportation equipment, orders grew at 0.1% and were up 7.7% from September 2017. Non-defense capital goods orders excluding aircraft – a proxy for business investment – declined for the second month in a row but rose 6.6% from the same time last year.

The U.S. economy grew at a 3.5% annual rate in the third quarter, the best third quarter in four years, according to the first of three estimates by the Bureau of Economic Analysis. Gross domestic product picked up with a 4% rise in consumer spending, the biggest surge since 2015. Government spending and inventory investment also gained while business investments narrowed from recent quarters and residential spending declined for the fifth times in six quarters. The preliminary data also showed the Federal Reserve’s favorite inflation gauge at 1.6%, down from 2.1% in the second quarter and still below the Fed’s 2% target. 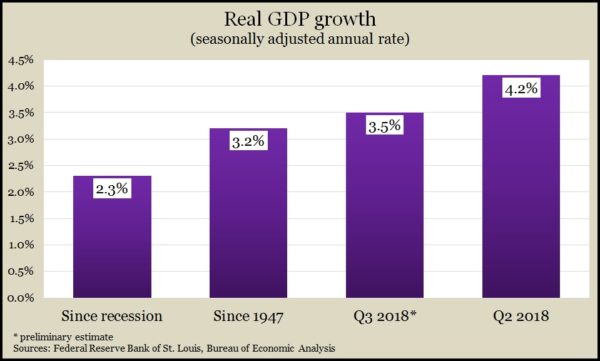