Inflation on the wholesale level rose 9.6% in November from the year before, the most since the Bureau of Labor Statistics began comparable calculations in 2010. The Producer Price Index added 0.8% from October, led by increased costs for energy, transportation and warehousing. Excluding volatile costs for energy, food and trade services, the core 12-month inflation rate was 6.9%, the highest year-to-year gain since 2014.

The Commerce Department reported a 0.3% rise in retail sales in November, less than half as much as analysts expected. Gas stations led the 13 categories with a monthly gain of 1.7% in sales, helped by increased prices. Electronics and appliance stores led the five categories in which sales declined from October. Compared to the year before, each category advanced, led by a 52% rise for gas stations and a 37% increase in sales at restaurants and bars. 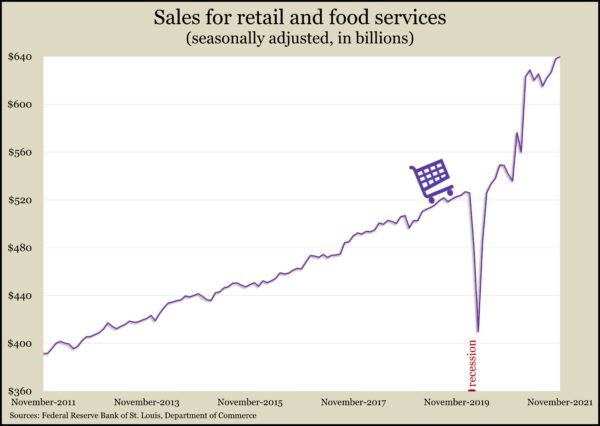 The four-week moving average for initial unemployment claims fell for the 10th week in a row to reach the lowest level since November 1969. According to Labor Department data, the average moved to 203,750 new applications, down from a record 5.3 million in April 2020 and 45% below the 54-year average. Some 2.5 million Americans claimed jobless benefits in the latest week, up 26% from the week before but down from 21.3 million the year before.

The U.S. housing industry picked up pace in November. Both housing starts and building permits accelerated, though both remained below 15-year highs set earlier in 2021. The annual rate of housing starts was up nearly 12% from October; initiations of critical single-family houses rose by 11%. Permits rose 3.6% from their pace in October. Single-family permits were up 2.7%, according to Commerce Department data. The number of houses under construction hit an annual rate of nearly 1.5 million in November, the highest since 1973.

U.S. industrial output rose 0.5% in November, reaching its highest level since September 2019, according to the Federal Reserve. Manufacturing output advanced 0.7% with widespread gains, led by automotive. November was manufacturing’s biggest month of production since January 2019. Overall capacity utilization rose to 76.8%, the highest in two years. An early indicator of inflationary pressure, capacity usage remained below the long-term average of 79.6%. 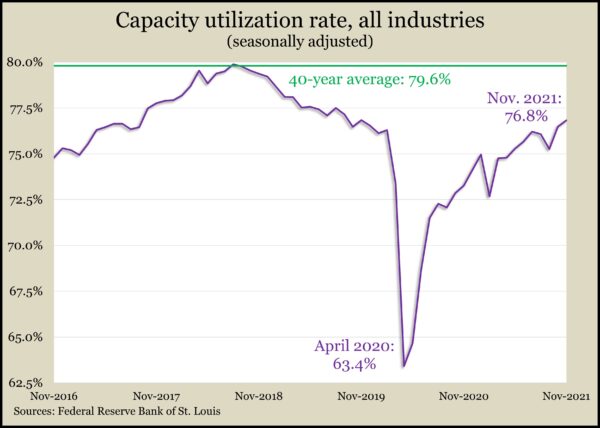