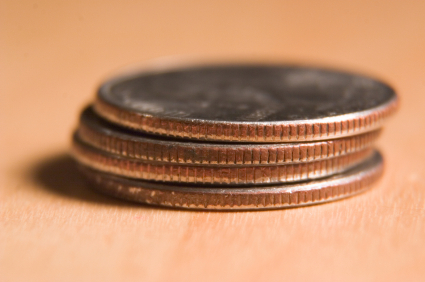 A few weeks back, a buddy of mine was sharing a conversation he recently had with his daughter on the occasion of her 18th birthday.  He laid four quarters on the table and told her that as she someday began a career her financial needs would be met if only she remembered the following:

I thought his message was succinct, but it made me wonder as a financial planner if I have done an adequate job of teaching my own children about finances.

Having given the matter some additional thought, I believe the following principles should be addressed as part of a young adult’s education.

Know the value of a dollar.

What is a dollar worth?  What a dollar can buy and what it takes to earn a buck are two different things.  Kids need to relate money to effort.  For instance, $40 for a tank of gas is a nebulous number until my 16 year old realizes that she has to babysit for five hours to earn a full tank.  The value of money is only meaningful when equated to the effort required to generate that money.  Easy come, easy go?  I don’t think so.  The easy go part I get, but there is no such thing as earning an easy dollar.

Compound interest is your friend.

Albert Einstein is said to have called compound interest the eighth wonder of the world – or the most powerful force in the universe, depending on who’s telling the story.  Either way, this is another concept that is difficult for young adults to relate to.

The difference is staggering and tells the story completely.  Start early and let your money work for you.  One of the things you can encourage your child to do from the first dollar earned is put some aside for saving.  Whether it is for school costs or retirement, the lesson of self sufficiency can never be started too early.

There is no such thing as good debt.

I hate debt.  Debt is the cancer to all our financial plans that insidiously eats away at our success.  The miracle of compound interest works against you when you’re paying it against debt.

Certainly, your home is difficult to acquire without financing.  In that case, you are paying down debt to acquire a growing asset, which offsets the interest costs. Credit card debt is purely a cost and has no financing benefit.  One debt is a necessary evil perhaps, but the other should be avoided at all costs.  If you give a young adult in your family a credit card, insist that it’s paid off promptly to avoid finance costs.

Prepare children to take care of their own financial needs.  The U.S. faces a serious, growing problem with accumulating government debt.  The biggest challenges we face relate to solvency of long-term entitlement programs like Social Security and Medicare and Medicaid.  It’s probable that benefits for these programs will be reduced or eliminated for some in the future.  The next generation needs to plan a secure future that does not depend on entitlement programs that may not be there for them.

Of course, you’d expect me to say this. It’s what I do for a living.  But you don’t begin any long-term undertaking without having a roadmap.  Your financial security is no exception, and it’s shocking how many people I meet who later in life still lack credible retirement goals.

Like all good habits, the earlier you begin, the greater the odds of long-term success.  This might be a great opportunity to lead by example.  Share with your children your financial goals and strategies.  Show them that as young adults they need to start early treating money matters in a rational, disciplined manner.

One of Brian’s daughters challenges him to run with her. Read his reflections on how that quest added to his perspectives on investing.

My oldest daughter is a senior in college and is very fortunate to have landed a great job to begin her career after graduation.  The first thing I did was throw together a quick budget for her to think about as she contemplates living arrangements in her new home town.

My wife laughed at my priorities, but I’m eager to send her off on the right foot to her own financial security.  It’s never too soon to start doing the right thing, and my hopes are for her to aim for the $5 million mark – not $1 million – as she looks to her future.

Sounds like a big number, but 40 years from now it may not be enough.  If I’ve done my job right, she’ll think about what the right number is for her while she’s still young enough to do something about it.