Bob’s View: Not Too Late 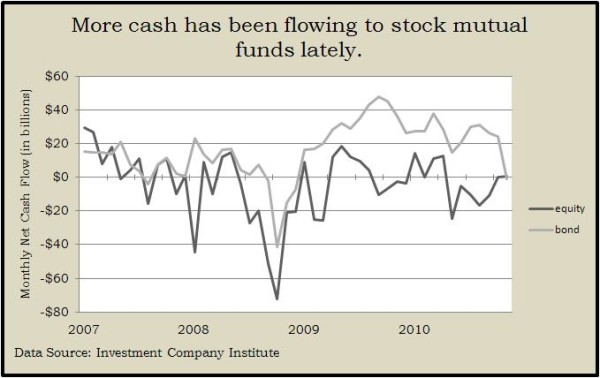 Now that individual investors appear to be getting more comfortable again with stocks, it doesn’t necessarily mean they’re wrong. Nor does it mean it’s too late to benefit from further gains in the equity markets.

The Investment Company Institute reported that weekly net flows to domestic equity mutual funds in mid-January were the highest since May 2010. That’s when the “flash crash” plunge in stock prices is believed to have scared many individual investors away from equities – 14 months after recessionary lows.

Add to that, the American Association of Individual Investors reports that its sentiment survey has registered more bullish than bearish for stocks for 20 weeks in a row, the longest streak in six years.

Some have questioned whether these are signs that turning more of your portfolio to stocks again might be, as a widely circulated Associated Press story suggests “too little, too late.”

But there is only a weak correlation between fund flows and market performance. And the market doesn’t need individual investors’ money to do well. It can do well without that money.

An example was the early 1990s, when stock prices went up on institutional trading and individuals never got in until later. More currently, the markets have gone up since their March 2009 lows without much active involvement from individual investors.

When the Dow Jones Industrial Average recently reached 12,000 points, it was 83% higher than it was in March 2009. You can’t say individual investors missed out on that rebound because of the $12 trillion they have in mutual funds, the majority is in stocks.

Meanwhile, just because stock prices are up that much isn’t to say they’re done rising. The Dow is still 18% below it pre-recession high of more than 14,000 points, in October 2007.

You can’t just be measuring from the very bottom and suggesting that it’s too late. Are prices higher? Yes, they are. But it’s not too late.

And although individual investors have been bullish for 20 weeks in a row, that’s only a few months. And it’s still not at euphoric levels. They’re not buying at huge levels, not like in 2006 or 2007, which would potentially indicate that they’re all in.

Ultimately, earnings move stock prices. And earnings are forecast to go up 13% this year. So in a normal market environment, that would suggest higher stock prices.

In a normal year, stocks go up in line with an increase in corporate profits. No mystery there. If earnings go down, stocks are going to go down. It’s kind of that simple.