A prime sign of the consumer spending that drives 70% of U.S. economic activity perked up in March as retail sales posted the biggest gain in 18 months. News from the Commerce Department reflected some of the rebound from severe winter setbacks in prior months. On a year-to-year basis, sales rose 3.8%, the highest since November, but still below the 4.6% 20-year average.

In a separate report, Commerce said business inventories increased slightly in February, although below analyst expectations. Sales grew at a faster pace, but the inventories-to-sales ratio remained at its highest level since late 2009, suggesting demand has to catch up with supplies before more hiring and capital investments are warranted.

The broadest measure of inflation nudged up more than expected in March, led by increases in shelter and food costs. Still, the Bureau of Labor Statistics reported the Consumer Price Index rose only 1.5% in the last 12 months, only 1.7%, if you factor out the volatile food and energy categories. That’s below the 30-year average inflation rate of 2.9% as well as the 2% target of the Federal Reserve, which has been trying to stimulate economic growth at a more sustainable rate.

Signs of a continued bumpy housing recovery came from a Commerce Department report showing housing starts rising less than expected in March, though dipping from the year-ago pace. Builders began working on nearly 950,000 houses, led by single-family residences. The pace of new building permits, which offers an indication of future housing plans, declined a bit from February but looked more encouraging than the year before. 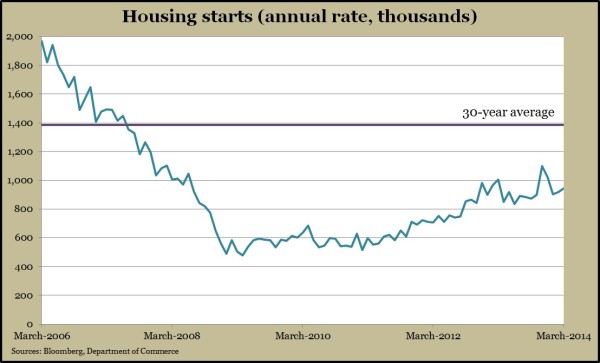 Factories, mines and utilities together increased output more than analysts expected in March. The Federal Reserve said industrial production continued a strong rebound from a setback in January blamed at least in part on severe weather. The telltale capacity utilization rate rose for the third month in a row to 79.2%, its highest level since June 2008. That’s still below the 30-year average of 80.1%, suggesting industry has room to grow output before pushing inflation higher.

The moving four-week average for initial unemployment claims fell for the sixth time in seven weeks and marked the lowest level since the recovery low in September. Data from the Labor Department show jobless claims remaining under the 47-year average, signaling employers’ continued reluctance to let workers go.