The Bureau of Labor Statistics said wholesale inflation dipped in February for the second time in three months, led by a 3.4% decline in energy prices. Excluding food and energy, the core Producer Price Index rose 0.1%. Year-to-year, which usually is a more telling measure, the index was unchanged, but the core increased by 0.9%, the most since July. The Federal Reserve Board has been watching for inflation to increase as a sign that the economy is growing at a sustainable pace.

In a sign that companies continue to overestimate demand for their products, business inventories rose in January while sales kept falling. The Commerce Department showed the ratio between inventories and sales reaching the highest point since May 2009 – during the recession, suggesting at least a temporary impediment to increases in production and employment.

The second month in a row of increased factory production was not enough to offset declines from utilities and mining operations in February. The Fed reported that industrial production fell for the fourth time in five months. Hampered by the global economic slowdown and relative strength of the U.S. dollars, gains in manufacturing offered a silver lining. Capacity utilization, an indicator of inflation prospects, also declined.

The departments of Commerce and Housing and Urban Development reported mixed news on the housing recovery. Housing starts rose 5.2% in February to an annual pace of 1.18 million new houses, but building permits – an indicator of future construction – fell 3.1% from the January rate. Permits are at about twice the pace they dropped to during the recession and only about half of the peak levels set in 2005 and 1972.

The broadest measure of inflation showed signs of economic growth in February. Although the broad Consumer Price Index fell slightly from its level in January – led by a continued slump in gas prices, the core index (excluding energy and food) rose 2.3% from February 2015. That was the biggest year-to-year increase since 2002, according to the Bureau of Labor Statistics. 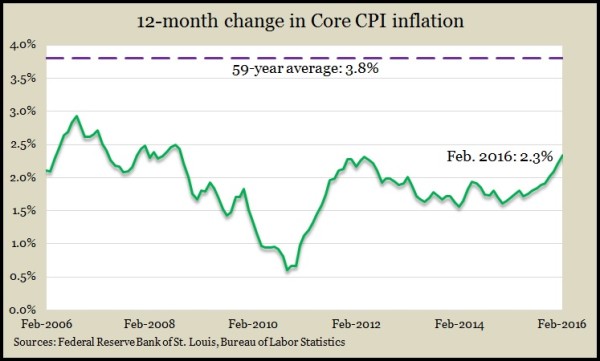 The moving four-week average for initial unemployment claims rose for the first time in six weeks, still hovering around 33-year lows. Data from the Labor Department showed jobless claims remaining below the 49-year average, where they have been every week for more than three years. The apparent reluctance by employers to let go of their workers brightens the prospects for further hiring and wage gains, which fuel consumer spending.

U.S. employers reported more than 5.5 million job openings in January, up 4.9% from December, which was quite lower than initially estimated. Openings rose 11.4% from January 2015 and remain near the record high set in July, according to the Bureau of Labor Statistics. The number of workers voluntarily quitting their jobs fell to the lowest level since October, suggesting a little less confidence in other job prospects.

The U.S. economy will continue growing moderately at least through mid-year and has “little chance of a downturn in the near-term,” according to the Conference Board. The business research group said its February report on leading economic indicators registered its first gain in three months. Among the weak spots cited were housing permits, consumer expectations and new orders.

Despite tepid retail numbers, an economist with the University of Michigan consumer sentiment survey expect moderate 2.7% growth in consumer spending in 2016. A preliminary March read of the sentiment index suggested Americans are expecting a slower economy and higher gas prices, but they don’t anticipate much impact on their personal finances. Overall, the mid-month index fell to its lowest reading since October.