Manufacturing expanded again in December after contracting in November and three of the previous five months, according to the Institute for Supply Management. Boosted by growth in new orders, production and employment, the purchasing managers’ index contained sentiments reflecting uncertainty over domestic government policies. Both export and import components of the index rose for the first time in months amid a global economic slowdown.

The Commerce Department said construction spending dipped in November, but residential building showed further evidence of recovery, rising 0.4% from the October rate of spending and 18% from November of 2011.

Auto dealers sold an annualized rate of nearly 15.4 million vehicles in December, according to Auto Data Corp. That was a bit below the stronger pace in November but beat analyst forecasts. Year-to-year, the sales rate grew by 12.9%, the third year in a row of double-digit increases for the industry. Some of the December sales were attributed to replacements for vehicles lost to Hurricane Sandy.

The moving four-week average for initial unemployment claims edged up for the first time in four weeks. The average has been hovering new the low point of the economic recovery after bouncing up in response to the Atlantic storms of late October, according to Labor Department data.

Employers added more jobs than expected in December, just slightly above the monthly average for the last two years, according to the Bureau of Labor Statistics. Government employment continued to fall while private payrolls expanded for the 34th month in a row. The unemployment rate stayed at 7.8% – the 48th consecutive month above 7.5%, sustaining the record for the longest period of rates that high. The U.S. remains 4 million jobs or 3% short of its employment peak in January 2008. 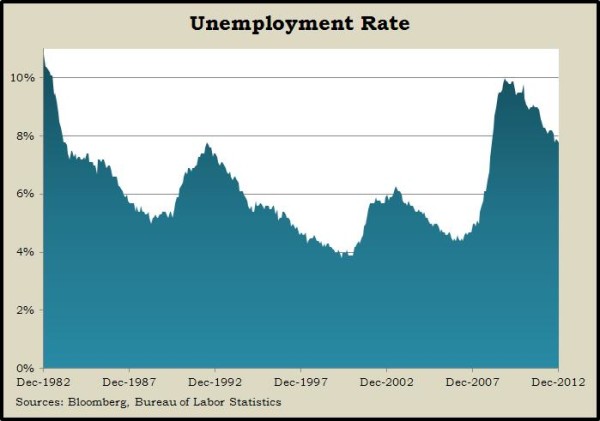 Held back by lower spending on fuel as some energy prices dipped, factory orders eked out a thinner gain than expected in November. Still, the Commerce Department reported the fourth increase in new orders in five months, and orders for capital equipment indicated greater investments by businesses.

Along with signs of renewed growth in the manufacturing sector, non-manufacturing expanded for the 36th month in a row in December. The Institute for Supply Management said the sector employing 90% of the nation’s workers grew at its fastest pace since February. The employment component in particular took a significant jump. Of 18 industries represented, 13 reported expansion.