The manufacturing index of the Institute for Supply Management rose in August to its highest level since May 2004. The index, based on surveys with purchasing managers, indicated the 24th month in a row of expansion for manufacturing. Most components of the index showed faster growth, including the 6th consecutive month of particularly strong readings for new orders. Survey respondents expressed escalating concern about trade tariffs. According to the ISM, the index suggested the U.S. economy was growing at an annual pace of 5.6%.

The annual rate of construction spending nudged up 0.1% in July, a 5.8% advance from July 2017, staying near its all-time record high, set in May. Housing spending, including home improvements, rose 0.6% for the month and 6.6% from the year before, according to the Commerce Department. Public construction spending rose 0.7% from June and 8.3% year-to-year. Expenditures on commercial construction declined 1% from June, and was up 3.2% from year before.

The pace of motor vehicle sales decelerated 0.3% in August, the second decline in a row. Dealers sold an annual rate of 16.7 million vehicles, according to AutoData Corp., which was the slowest pace in a year. Car sales declined both on a monthly and year-to-year basis. Truck sales increased, particularly among imported models over the year. Analysts watch automotive sales for signs of trends in consumer spending, which accounts for more than two-thirds of U.S. economic growth.

The U.S. trade deficit widened 9.5% to $450.1 billion in July, the biggest increase since 2015 and the widest gap since February. The Bureau of Economic Analysis said exports, disadvantaged by a strong U.S. dollar, declined 1%. Imports, aided by healthy U.S. consumer spending, rose 0.9% to a record high. Net exports contribute to the gross domestic product, so a widening trade gap detracts from economic growth.

The four-week moving average of initial unemployment claims reached the lowest point since the week of Dec. 6, 1969. The barometer of jobless applications fell for the third week in a row and the eighth time in nine weeks, dropped 41% below the 51-year average, according to Labor Department data. The gauge continued to point to a tight employment market and a persistent reluctance among employers to let workers go.

The Bureau of Labor Statistics reported that worker productivity rose at an annual rate of 2.9% in the second quarter, the fastest pace since the beginning of 2015. Worker output increased at a 5% pace in the second quarter, while hours worked rose 2%. Unit labor costs declined 1%. Sluggish productivity has been an ongoing concern since the recovery from the Great Recession. Productivity is key to maintaining the standard of living and raising wages, which fuels economic growth.

The Commerce Department reported that factory orders declined in July for the first time in three months, led by a drop in aircraft orders. Excluding volatile orders for transportation equipment, demand rose 0.2% for the month and was up 8.1% year-to-year. A proxy for business investments, which has been lagging economic expansion recently, rose 1.6% for the month, the fourth increase in a row, and was up 7.3% from July 2017.

The non-manufacturing sector of the U.S. economy continued to expand in August for the 103rd consecutive month. The ISM non-manufacturing index accelerated to a reading of 58.5, exceeding the 12-month average, which includes a 13-year high in January. Components measuring business activity, new orders and hiring grew faster. The Institute for Supply Management said the index level is consistent with an annual growth rate of 3.5% for the U.S. gross domestic product. 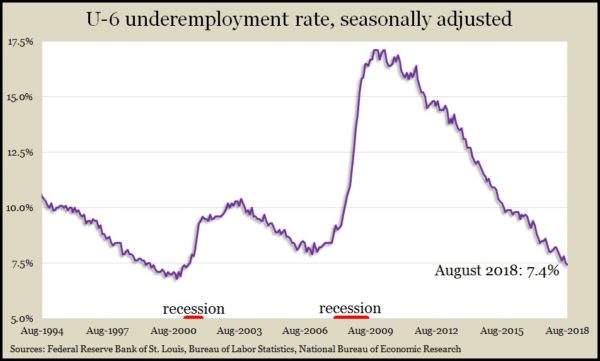 U.S. employers added 201,000 jobs in August, more than analysts expected and above the 12-month average of 196,000. The Bureau of Labor Statistics reported 50,000 fewer jobs than initially estimated in June and July. Average hourly wages rose 2.9% from August 2017, also better than expected and the most since 2009. Some economists suggest wage growth still isn’t as high as it should be, considering the unemployment rate stayed at 3.9%, the lowest since 1970. The labor market also looked tight via the U-6 rate, which includes unemployed, involuntary part-time and marginally attached workers. The rate hit its lowest mark in more than 17 years.