The manufacturing index of the Institute for Supply Management signaled contraction in August for the first time in 35 months. The index, based on surveys with purchasing managers, hit its lowest mark since January 2016. Survey respondents expressed escalating concern about trade tariffs. According to the ISM, the index suggested the U.S. economy was growing at an annual pace of 1.8%.

The annual rate of construction spending nudged up 0.1% in July, a 2.7% decline from July 2018. Housing spending, including home improvements, rose 0.6% for the month but fell 6.6% from the year before, according to the Commerce Department. Public construction spending rose 0.4% from June and 4% year-to-year. Expenditures on commercial construction declined for both periods.

The pace of motor vehicle sales rose 0.7% in August to 17 million vehicles, according to the Bureau of Economic Analysis. The sales rate was down slightly from its 12-month average but was up 0.7% from August 2018. Sales of light trucks improved while cars declined. Light trucks made up a record 73% of the sales in August, up from about 50% as recently as 2013.

The four-week moving average of initial unemployment claims rose for the fourth time in five weeks but remained near 50-year lows. The barometer of jobless applications was 39% below the 52-year average, according to Labor Department data. The gauge continued to point to a tight employment market and a persistent reluctance by employers to let workers go, which should encourage more consumer spending.

The Bureau of Labor Statistics reported that worker productivity rose at an annual rate of 2.3% in the second quarter, unchanged from a previous estimate, with output increasing at a 1.9% pace and hours worked down 0.4%. Measured from the same time last year, hours worked rose 0.9%, the lowest since 2010. Unit labor costs rose 2.6%, up from an initial estimate of 2.4%. Productivity is key to maintaining the standard of living and raising wages, which fuels economic growth.

The Commerce Department reported that factory orders rose 1.4% in July for the second gain in a row, led by commercial aircraft orders. Excluding volatile orders for transportation equipment, demand rose 0.3% for the month and was up 0.7% year-to-year. A proxy for business investments, which has been lagging economic expansion recently, rose for the third month in a row, and was up 1.5% from July 2018.

The non-manufacturing sector of the U.S. economy continued to expand in August for the 1115th consecutive month. The ISM non-manufacturing index accelerated to a reading of 56.4, below the 12-month average but exceeding analyst expectations. The Institute for Supply Management said 16 of 17 industries reported growth amid concerns about tariffs and geopolitical uncertainties. The trade group said the index level is consistent with a 3.5% growth rate for the U.S. gross domestic product.

U.S. employers added 130,000 jobs in August, fewer than analysts expected and below the average of 158,000 per month so far in 2019 and the 223,000 in 2018. The Bureau of Labor Statistics reported 20,000 fewer jobs than initially estimated in June and July. The average hourly wage rose 3.2% from August 2018, eclipsing 3% for the 11th month in a row. The unemployment rate stayed at 3.7% for the third month  in a row, near the 50-year low. The ratio of working-age population who were employed nudged up to the highest point since the end of 2008 but still hasn’t recovered to pre-recession levels. 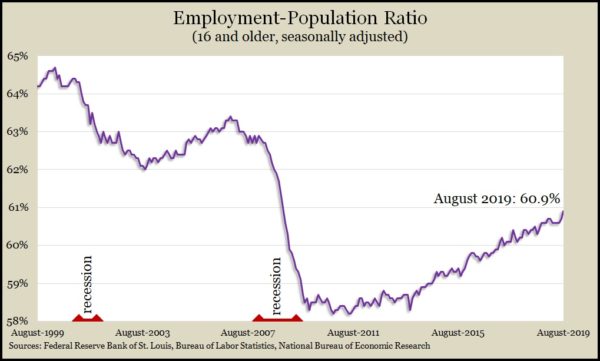