U.S. manufacturing got a surprisingly large boost in August, according to the Institute for Supply Management. The trade group’s index rose for the sixth month in a row to its highest level since March 2011, more than analysts expected, with new orders, production and employment all growing at a faster pace. New orders were the strongest in 10 years, suggesting continued economic expansion from the nation’s factories.

Motorists wouldn’t be surprised to learn that highway work contributed to growth in the annual rate of construction expenditures in July. Overall, gains in non-residential projects outpaced housing as the construction spending increased the most in one month since mid-2011. According to the Commerce Department, Year-to-year spending was up 8.2% from the year before.

Extraordinary contracts for commercial aircraft sent American factory orders soaring a record 10.5% in July. After adjusting for the volatile transportation sector, the Commerce Department said demand actually declined for the second time in three months. But June orders were stronger than previously estimated, and levels of inventory and unfilled orders suggest continued growth for manufacturing.

Americans bought motor vehicles in August at a faster pace than any month since January 2006. Auto Data Corp. said dealers sold an annual rate of 17.5 million vehicles for the month, up 6.4% from July and up 10% from August 2013. Trucks led the sales growth, with domestic vehicles selling faster than imports. The brisk demand for autos suggests continued momentum for consumer spending.

The U.S. trade deficit narrowed to $40.5 billion in July, the lowest in six months, as exports rose to a new record, the Bureau of Economic Analysis reported. The trade gap shrank three months in a row, as exports of U.S. fuel have narrowed the petroleum products deficit to the slimmest margin since 2009. The overall gap with China reached a record high in a sign that increased U.S. consumer spending is benefiting imports from the world’s No. 2 economy. 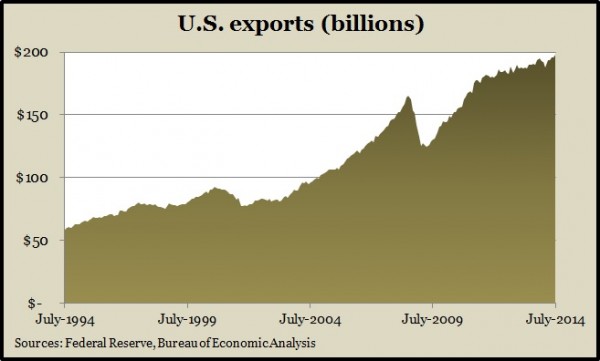 The Bureau of Labor Statistics said productivity rose at a 2.3% annual rate in the second quarter, rebounding from a 4.5% decline in the first three months of the year. Unit labor costs fell unexpectedly at a 0.1% annual rate after climbing 11.6% in the first quarter. The latest revisions of the second-quarter data show the economy rebounding from the first-quarter setbacks resulting from unusually harsh winter weather conditions around the country.

The moving four-week average for initial unemployment claims rose for the third time in four weeks but remained near eight-year lows. Employers reluctant to let workers go have kept jobless claims below the long-time average for more than 20 months, according to the Labor Department. The trend bodes well for the hiring climate.

The Institute for Supply Management said its non-manufacturing index grew in August to the highest level since the measure began in 2008. The trade association’s index covering industries employing 90% of the U.S. workforce signaled expansion for the 55th month in a row. All 15 industries surveyed reported growth. The majority of respondents expressed optimism, although some suggested the pace of growth may soon taper off.

Employers added fewer jobs than expected in August and not as many as previously estimated in June and July. The Bureau of Labor Statistics reported 142,000 jobs gained in August, 33% below the 12-month average of 212,000. Some economists suggested end-of-summer statistical flukes could be behind the hiring dip. Jobs added included fields such as management, architecture, engineering and technical consulting. Temporary help positions, considered a leading indicator of future hiring, kept climbing, although at a slightly slower pace. The unemployment rate slipped to 6.1% from 6.2% in July – more because of workers dropping out of the labor force than individuals landing new jobs.