The manufacturing sector grew for the third month in a row in August and at its fastest pace since November 2018, according to the Institute for Supply Management. The ISM Manufacturing Index continued to rebound from its lowest reading in 11 years in April. New orders increased at their highest level since 2004. However, employment remained depressed, contracting for the 13th month in a row, although at a slower rate than in July.

Total construction spending was statistically unchanged in July compared both to June and to the year before, the Commerce Department reported. Residential spending, however, rose 2.1% for the month and 1% from July 2019 as home buyers capitalized on historically low mortgage rates and at-home workers invested in their living quarters. Non-residential spending declined in both periods, led by lodging, offices, schools and amusements. Public spending rose 5.1% in July, led by public safety and water projects.

The Commerce Department said manufacturing continued to recover although at a slower pace in July with factory orders up 6.4%, following a slightly higher increase in June and a rise of nearly 8% in May. Demand for manufactured goods was still down 6.1% from the pre-pandemic level in February. Orders remained 9.6% lower than the year before. In particular, orders for automobiles and military aircraft have boosted manufacturing’s comeback.

The four-week moving average for initial unemployment claims continued receding from historic highs, dipping just below 1 million for the first time in 24 weeks. The average before the pandemic, dating back to 1967, was about 350,000. Including ongoing claims, more than 29 million Americans received jobless benefits, according to the latest Labor Department data, up from 1.6 million at the same time last year. Nearly 15 million beneficiaries received special pandemic relief.

Worker output and hours worked both decreased in the second quarter at the steepest pace ever, the Bureau of Labor Statistics said. As a result, worker productivity declined at an annual rate of 10.1%, the most since the beginning of 1971. For the latest quarter, output fell at an annual rate of 37.1%, while hours worked dropped 42.9%. Compared to the second quarter of 2019, productivity rose 2.8%, vs. an average annual increase of 2.2% since 1948.

The U.S. trade deficit widened in July to its biggest gap since 2008, amid uneven recovery attempts across the globe. The Bureau of Economic Analysis said the trade gap grew by 18.9% to $63.6 billion, with exports rising 8.1% and imports up by 10.9%. The disparities suggest the post-pandemic revival in global demand was not keeping up with U.S. consumption. A larger trade gap will be a negative factor in the gross domestic product in the third quarter.

The U.S. service sector expansion slowed in August, its third month of recovery after contracting in April and May. The Institute for Supply Management said its ISM index of non-manufacturing activity showed sector growth for the 125th time in 127 months as businesses reopened from pandemic closures and demand picked up. Of 18 industries surveyed, 15 reported growth in August. An index component for employment indicated contraction for the sixth month in a row.

The labor market recovery slowed in August amid continued progress in both jobs and the unemployment rate, the Bureau of Labor Statistics reported. A net gain of 1.4 million jobs in August brought the comeback to 10.6 million since April but was still 11.5 million or 7.6% below the all-time high in February. Jobs were on par with the employment level in March 2015. Nearly a quarter of the additional jobs were government positions, and most of those were temporary census takers. The unemployment rate dropped to 8.4% from 10.2% in July and 14.7% in April but remained a far cry from the 50-year-low of 3.5% just before the pandemic. Data showed the number of workers on temporary layoff declining, but the number of permanent job losses increased. 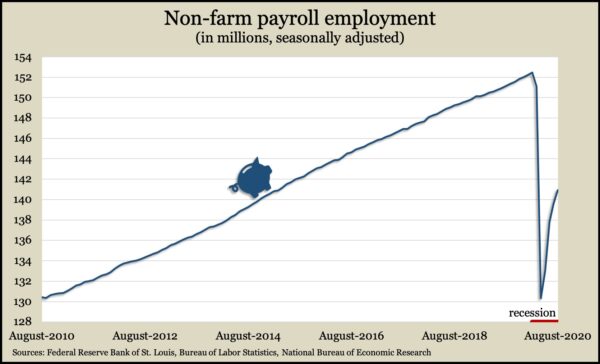