Sales of newly built houses remained above their levels before the financial collapse in 2008. The Commerce Department said new home sales declined in August from July’s annual rate, which was the highest in nearly nine years. In a sign that the choppy recovery in housing continues, sales were up more than 20% from August 2015 nationwide, with the Midwest up almost twice that rate.

The housing recovery raised selling prices again in July, according to the S&P CoreLogic Case-Shiller home price index. The 12-month price increase among 20 cities was 5%, a tad lower from the June pace, as well as analysts’ expectations. House prices still grow at more than double the general rate of inflation. A housing economist with Standard & Poor’s cited the Federal Reserve’s optimism in overall economic growth and historically low mortgage rates as reasons to expect further gains for housing. While the national housing price index is nearly back to its July 2006 peak, outstanding mortgage debt is almost 13% below where it was when the financial markets collapsed.

September consumer confidence exceeded analyst forecasts, rising to its highest level since the recession, the Conference Board reported. The business research group said that consumers were even more encouraged by current economic conditions and also more optimistic about future prospects, especially in terms of employment. Economists consider consumer confidence a leading indicator of consumer spending.

Commerce said orders for durable goods declined ever so slightly in August, the third setback in four months. Even excluding the volatile transportation orders, manufacturers faced continued weak markets affected by slower economic growth globally. A proxy for business equipment investments increased for the third month in a row, but the year-to-date orders for the category were still down 4%.

The U.S. economy grew more than previously estimated in the second quarter, up an annual rate of 1.4%, the Bureau of Economic Analysis reported. That surpassed the earlier 1.1% estimate for quarter as well as the first-quarter growth rate of 0.8%. The report showed gross domestic product benefiting from greater exports than initially estimated as well as a slimmer drop in business equipment spending. Consumer spending, which drives more than two-thirds of U.S. economic activity, rose a healthy 4.3%. 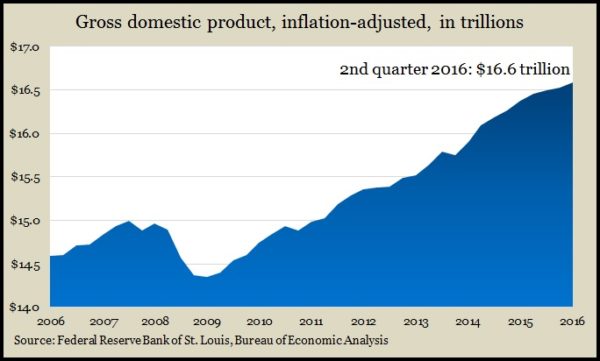 The National Association of Realtors said its pending home sales index fell in August for the third time in four months. An economist for the trade group blamed lack of both supply and affordability. Inventory was down from year-ago levels for 15 months in a row while year-to-year price comparisons have been rising for four and a half years. Still, Realtors forecast selling 5.36 million houses this year, which would be the most since 2006.

The moving four-week average for initial unemployment claims tied a 42-year low set in April. According to data from the Labor Department, jobless applications have been below the all-time average every week since early 2013, indicating that employers are being careful about letting workers go. That helps support a stronger hiring market.

The U.S. trade deficit narrowed in August to a lower-than-expected $58.4 billion. The Commerce Department said exports outgained imports by 0.7% to 0.3%. The increase in imports included more capital goods, hinting that U.S. businesses may be starting to invest more in themselves.

The Bureau of Economic Analysis said personal spending was flat in August following encouraging gains in July and June. Personal income also softened, up o.4% in August, the lowest increase in seven months. As a result, the personal saving rate rose to 5.7% of disposable income, suggesting consumers are holding back some of their spending at least for the moment. In the same report, the Federal Reserve’s favorite measure of inflation showed a 1.7% year-to-year increase, up from a few months in a row at 1.6%. The Fed’s target rate is 2%.

In another indication that greater consumer spending may be on the horizon, the University of Michigan consumer sentiment index rose higher than analysts expected in September. The index remained higher than average for economic expansions and reflected improved outlooks, especially among consumers with higher incomes. An economist with the survey said data suggest a 2.7% growth rate in consumer spending in the next year.