The recently scorching housing market may be starting to cool, according to pending home sales data released by the National Association of Realtors. The trade group’s index on contract signings indicated a 1.8% decline in commitments in July, the second monthly decrease. The index was down 6.7% from July 2020. With the fervor for home buying easing, the supply of houses for sale should gradually loosen, providing more options for prospective home buyers. The association said 27% of contracts signed in July skipped contingencies for appraisals or inspections.

High demand and low supply drove another record increase in home prices in June. The S&P CoreLogic Case-Shiller national index reached the highest level in its 33-year history with a record 18.6% gain in prices from the year before. June marked the 13th month in a row the year-to-year increase accelerated. It also was the third record gain in as many months. Housing prices continued to far outpace the rate of overall inflation. An economist with the Case-Shiller index said the latest data provided more evidence that COVID-19 helped drive more urban apartment dwellers to buy homes in the suburbs. 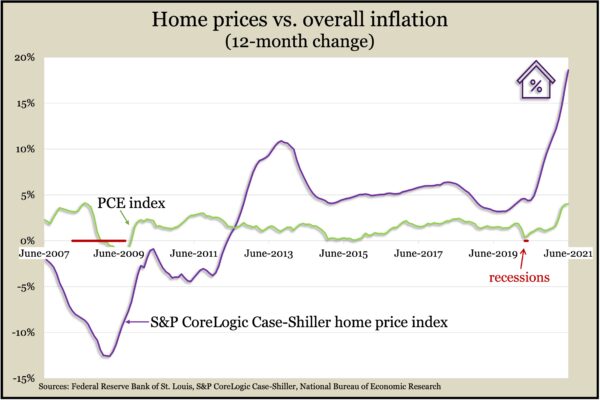 The delta variant of the COVID-19 coronavirus has pulled consumer confidence to its lowest level in six months. The Conference Board said Americans have lower expectations for buying big-ticket items in coming months, although more plan on taking vacations. The business research group said concerns about higher prices for gas and food also weighed on consumer confidence. The Conference Board said it was too early to tell if the decline in outlook would actually stifle near-term spending.

The manufacturing sector expanded in August at a faster pace as executives complained of “unprecedented” struggles to keep up with rising demand. The Institute for Supply Management said its manufacturing index signaled growth for the 15th month in a row, rising to a reading of 59.9 from 59.5 in July. Supply managers surveyed repeated ongoing challenges hiring and keeping the workers they needed as well as dealing with shortages of parts and disruptions in supply chains.

Housing led a 0.3% increase in the pace of construction spending in July, which reached another record annual rate, at nearly $1.57 trillion. The Commerce Department reported residential spending rose 0.5% from the June pace and was up 26.5% from July 2020. Spending on lodging and schools declined for both periods.

The four-week moving average for initial unemployment claims fell below the 54-year average for the first time since before the pandemic. A Labor Department report showed first-time applications dropping for the third week in a row to a rolling average of 355,000, down from 5.3 million in April 2020, though up from a 52-year low of about 210,000 in February 2020. More than 12 million Americans claimed unemployment compensation in the latest week, about three-fourths of them through pandemic relief programs scheduled to end this month.

The U.S. trade gap narrowed 4.3% to $70.1 billion in July after reaching a record $73.2 billion in June, the Bureau of Economic Analysis reported. Exports rose 1.3% in July, including shipments of automotive products. Imports declined 0.2%, led by consumer goods such as phones and toys. Through the first seven months of 2021, the trade deficit rose 37.1% from the year before with a 16.8% rise in exports and a 21.3% rise in imports.

The Bureau of Labor Statistics said worker productivity rose at an annual rate of 2.1% in the second quarter, revised from an initial estimated of 2.3%. The annual growth rate for output rose 8.1% in the quarter while the pace of hours worked rose 6%. Since the first quarter of 2021, productivity rose 1.8%. The report showed increased productivity through the first six quarters of the pandemic, with output growing 1.3% while hours worked fell 2.7%.

Despite a drop-off in requests for commercial aircraft, U.S. factory orders rose in July for the 14th time in 15 months. Orders were up 0.4% overall and 0.8% excluding the volatile transportation category. Since July 2020, total orders rose 18%; excluding transportation, orders rose 13.9%. Core capital goods orders, considered a proxy for business investments, rose 0.1% for the month and 16.5% from July 2020.

U.S. employers added 235,000 jobs in August, the least since January and less than half the monthly rate of 586,000 so far in 2021. Since April 2020, 17 million jobs have returned to the economy, still 5.3 million or 3.5% shy of the pre-pandemic peak in February 2020. According to payroll data from the Bureau of Labor Statistics, only the transportation-and-warehousing segment gained enough jobs to be above its pre-pandemic level. Bars and restaurants lost 42,000 jobs in August, and the whole leisure-and-hospitality field remained down 1.7 million jobs or 10% from before the pandemic. The bureau’s household survey showed the unemployment rate declining to 5.2% from 5.4% in July, but that was down from a record 14.8% in April 2020. In February 2020, the rate was 3.5%, the lowest since 1969. 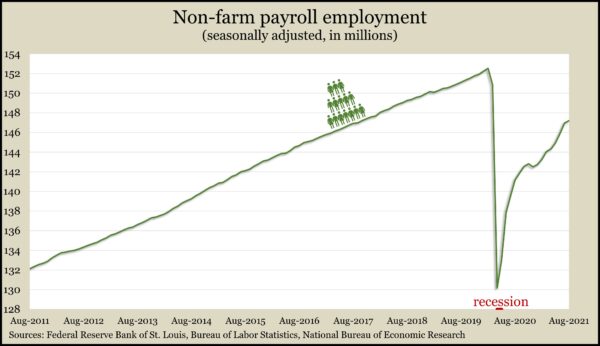 The service sector of the U.S. economy expanded in August for the 15th month in a row, though slightly slower than at the record pace set in July. The Institute for Supply Management said its services index showed continued expansion for the biggest portion of the economy with every industry growing except arts and entertainment. Supply managers surveyed by the trade group reported ongoing challenges with logistics and labor as they worked to meet customers’ rising demands.