Housing inflation continued to weaken in July as the year-to-year price increase reached the lowest in seven years. According to the S&P CoreLogic Case-Shiller home price index, the 12-month price gain among 20 cities was 2%, down from 2.2% in June. The margin has slimmed each month since reaching 6.7% in March 2018. Prices could start picking up again, though because an economist with the index cited signs of renewed housing demand along with tighter supply after inventories apparently peaked in June.

The Conference Board said consumer confidence declined in August for the second month in a row. Consumers shared lower opinions for both current conditions and the outlook for coming months. The business research group said trade and tariff tensions have “rattled” consumers and could undermine their confidence, which could dampen consumer spending, the biggest driver of U.S. economic growth.

New home sales rose 7.1% in August to 713,000 houses, nearing the 12-year high set in June, the Commerce Department reported. The annualized sales rate was an 18% increase from August 2018, suggesting revived activity in the housing market accompanying lower mortgage rates. All the latest gains came from the South and West. The median sales price rose 2.1% from the year before.

The National Association of Realtors said its pending home sales index rose 1.6% in August, rebounding from a 2.5% July decline. The index rose 2.5% from August 2018. An economist for the trade group credited lower mortgage rates for drawing more buyers to the market and warned that low inventory will continue to push up prices. The Realtors forecast a 0.6% increase in the number of houses sold in 2019 followed by a 1.6% gain in 2020.

The U.S. economy grew at a 2% annual rate in the second quarter, down from 3.1% to begin the year, according to the Bureau of Economic Analysis. The final estimate of the quarter’s gross domestic product was unchanged from the previous report, with consumer spending rising at a strong 4.6% annual rate. Investments by businesses declined for the first time since the end of 2015, and housing investments contracted for the sixth quarter in a row. Government spending rose at a 4.8% annual rate. The Federal Reserve Board’s favorite measure of inflation came in at 1.9%, up from a 1.1% rate in the first quarter. 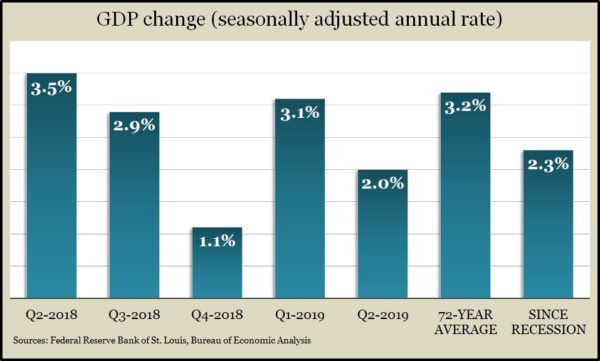 The four-week moving average for initial unemployment claims fell for the third week in a row and the fourth time in five weeks, remaining near the lowest level since late 1969. According to data from the Labor Department, jobless applications have been below the 52-year average every week since 2013, indicating that the hiring market is so tight that employers are reluctant to let workers go.

The Bureau of Economic Analysis said personal spending rose 0.1% in August, down from 0.5% in July and the slowest growth since February. Personal income rose o.4%, though, so the personal saving rate rose to 8.1% of disposable income from 7.8% in July. In the same report, the Federal Reserve’s favorite measure of inflation showed a 1.8% year-to-year increase, up from 1.7% in July and closer to the target level of 2%.

The University of Michigan consumer sentiment index declined from its mid-September estimate but eclipsed 100 for only the third time since 2004. Consumers say they expect improve personal finances in the year ahead as well as continued economic growth. Nearly one-third of respondents cited tariffs as possibly having a negative impact on the economy. A University of Michigan economist said the high sentiment should mean consumer spending increases averaging 2.6% through mid-2019.

Durable goods orders rose 0.2% in August, boosted by military spending. Orders for both commercial aircraft and automobiles declined, according to the Commerce Department. Excluding the volatile category of transportation equipment, orders rose 0.5%. Excluding defense, orders fell 0.6%. Year-to-year, orders overall declined 0.4%, with a 0.7% rise excluding transportation and a 0.5% decline excluding defense. An indicator for business investment increased 1.1% from August 2018, including a 0.2% decline from July.