The housing industry extended its long recovery in July, according to the S&P/Case Shiller Home Price Index. The year-to-year gain in home prices reached 12.4%, the highest since early 2006 and the 14th in a row in double digits. But the size of gains has been slowing in recent months, suggesting the indicator may be cresting as mortgage rates have risen.

The Conference Board said its consumer confidence index for September dipped from August as Americans lowered their expectations of the economy, questioning whether jobs and earnings could keep improving. The business research group said confidence in current conditions gained slightly from August.

The annual rate of new-home sales grew in August, although the two-month rate combined for the lowest back-to-back increases since fiscal cliff worries toward the end of 2012. The Commerce Department reported the supply of new houses for sale rose slightly and the margin of price increases narrowed, more signs that higher mortgage rates may be slowing the housing recovery.

The U.S. economy grew at a 2.5% annual pace in the second quarter, up from 1.1% in the first three months of the year, the Bureau of Economic Analysis confirmed. The Gross Domestic Product received more help from housing construction than previously estimated. Consumer spending rose by a 1.8% annual rate, and inflation remained subdued, indicating the expansion isn’t going too fast. 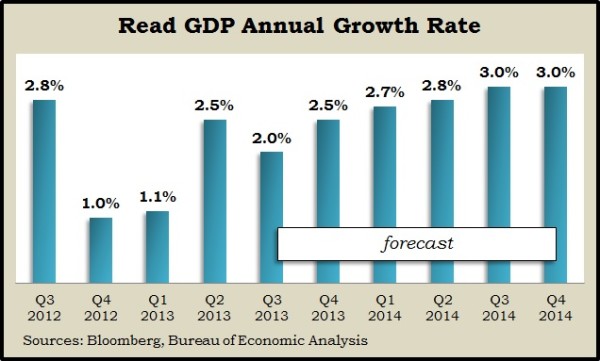 Contracts for home sales fell more than expected in August after dipping in July on the heels of the hottest sales market in six years. The National Association of Realtors blamed strict lending practices, tight inventory and higher mortgage rates for slowing pending sales. On a year-to-year basis, sales have risen for 28 months in a row.

The four-week moving average of initial unemployment claims reached its lowest mark since June 2007. The Labor Department indicator has remained below the 46-year average all year, suggesting employers are reluctant to let workers go.

Despite increased payroll taxes this year, personal spending rose again in August, for the fourth month in a row. The Bureau of Economic Analysis said personal income also rose for the fourth consecutive month, and a key measure of inflation stayed well below the Fed Reserve’s target, which could encourage the Fed to further delay plans to taper its economic stimulus program.

Consumer sentiment fell in September to its lowest point in four months, according to the University of Michigan and Thomson Reuters. Survey respondents lowered expectations for the economy in the next six months while indicating slightly improved confidence in current conditions. Economists watch consumer sentiment as a harbinger of the personal spending that drives 70% of the gross domestic product.