In another sign that the housing industry is at long last recovering, the annual rate of housing starts climbed more than 2% in August. Next to June, it was the highest rate in nearly four years. The Commerce Department also said that building permits, which reflect future housing plans, rose more than analysts expected. 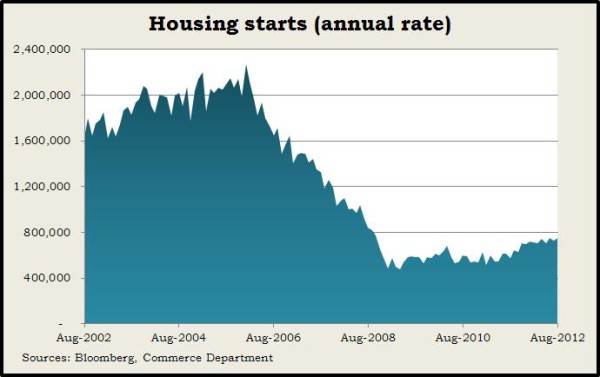 In a separate report, the National Association of Realtors said existing home sales rose in August to the highest level since a federal tax credit boosted home buying two years ago. The report showed the median sales price increasing year-to-year for the sixth month in a row. That’s the longest streak since early 2006. The trade group said pent-up demand and record-low mortgage rates are overcoming stricter lending requirements.

The moving four-week average for initial unemployment claims grew for the fifth week in a row and the sixth time in seven weeks, reaching its highest level since July. Labor Department data showed Americans continued to lose jobs at a rate that has made little progress all year, though losses remain well below the recession peak and about 9% lower than the year before.

The Conference Board’s index of leading economic indicators pointed to more slow growth in coming months. The business research group’s index declined in August for the third time in six months, as only four of 10 indicators gained from July. Much of the growth came from financial measures such as stock prices and the yield spread.