Industrial production rebounded in August, rising 0.6% following a 0.1% setback in July. The Federal Reserve reported that manufacturing output increased by 0.5%, reversing a 0.4% decline in July. Mining production surged 1.4% after dropping 1.5% in July partly because of disruptions from Hurricane Barry. Capacity utilization rose to 77.9% in August, the first increase since hitting a post-recession high of 79.6% in November. Usage still remained below the long-term average of 79.8%, suggesting little threat of inflation. 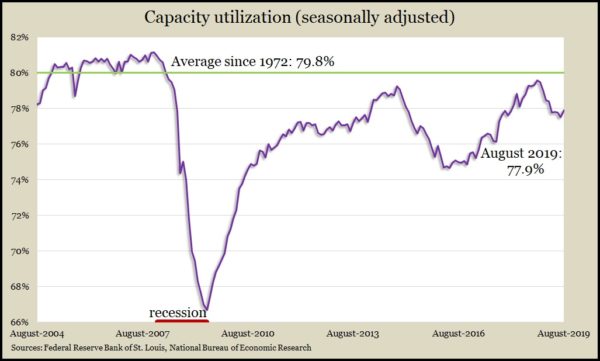 Sales of existing houses rose 1.3% in August, the second gain in a row. The National Association of Realtors reported an annual rate of 5.49 million houses sold in August, up 2.6% from the year-ago pace. An economist for the trade group cited low mortgage rates as an attraction to home buyers but complained that a chronically low supply of houses for sale has kept prices climbing. The year-to-year median price rose 4.4% from the year before, the 90th increase in a row.

The moving four-week average for initial unemployment claims fell for the third time in four weeks, still hovering near 50-year lows. Jobless claims were 40% below the 52-year average, according to Labor Department data, suggesting that employers continue to be reluctant to let workers go. The indicator has been a persistent sign of a tight labor market, which has been boosting consumer confidence.

The index of leading economic indicators was unchanged in August, following a 0.4% rise in July. The Conference Board said weakness in manufacturing offset stronger signs in housing. Based on the index, the business research group said the U.S. economy should continue to grow slowly, driven by consumer spending, which accounts for about two-thirds of economic activity.