The Federal Reserve said industrial production kept increasing in August, including manufacturing growth led by automobile makers. Utilities production declined for the fifth month in a row. Also the percentage of all production capacity in use remained plateaued beneath the long-term and pre-recession levels. That suggests producers could grow even more before triggering worries about inflation.

The broadest measure of inflation stayed lower than expected in August – and lower than desired by the Federal Reserve. The Bureau of Labor Statistics said the Consumer Price Index gained 0.1%, with food prices up marginally, energy costs dipping for the first time in four months and used vehicle prices falling for the fourth month in a row. The year-to-year core inflation rate, which excludes volatile fuel and food prices, rose 1.8%. That was the highest since March but still below the 30-year average of 2.9% and, more significantly, the 2% rate the Fed expects to reflect a healthy economy. 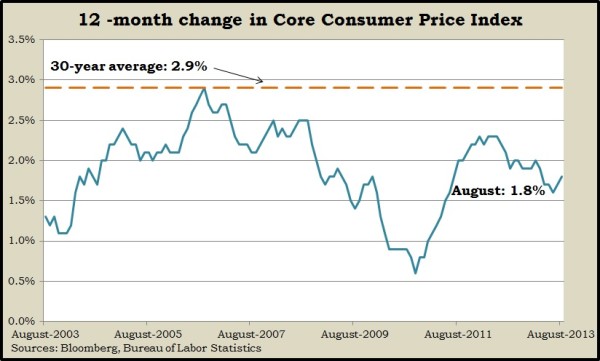 Further evidence of the U.S. housing recovery came from a Commerce Department report that builders started constructing single-family homes in August at the fastest pace in six months. The more-volatile rate of multi-family units held back the total housing starts rate, but building permits for single-family houses rose to the highest pace this year.

Another August housing indicator – existing home sales – jumped to the highest annual rate since February 2007, according to the National Association of Realtors. The trade group warned that higher mortgage rates, limited inventories and what they see as continued strict lending rules could combine to make for bumpy housing sales in the next few months. But the August gains included the 18th month in a row of year-to-year increases in sales prices.

The moving four-week average for initial unemployment claims fell for the ninth week in 10 weeks, dipping to its lowest level in six years. Labor Department data suggested American employers – who haven’t been hiring robustly – remain reluctant to part with workers. Jobless claims have stayed below long-term averages every week so far this year.

The Conference Board’s index of leading economic indicators pointed to a slightly faster pace of slow growth in coming months. The business research group’s index rose in August and showed a near-doubling of its six-month rate. An economist for the group said housing and employment continue to be wild cards in the economic expansion as well as fiscal policies and distractions from Washington over the federal debt ceiling.