The Federal Reserve said industrial production dipped in August for the first time in three months, largely because of a slowdown in auto manufacturing after a strong July. Industrial output has declined four times in the last six months, reflecting the impact of low commodity prices on energy and mining companies as well as the struggle of exporters contending with the strong dollar. Overall industrial output remained above the pre-recession level for the 24th month in a row. Meanwhile, the capacity utilization rate dropped even farther below the long-time average, indicating room for further growth before inflation becomes a problem. 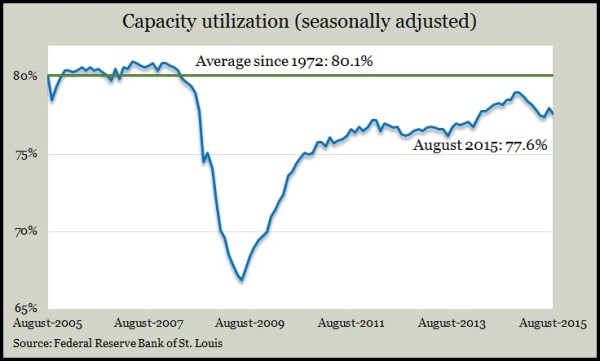 As analysts expected, business inventories rose slightly in July at the same pace as sales. Year-to-year, though, businesses have been overestimating demand for their products, with inventories rising 2.7% while sales fell 2.6%, according to the Commerce Department. The resulting inventories-to-sales ratio is as high at it has been since the end of the recession six years ago, suggesting businesses are not as lean nimble as they were even a year ago.

Commerce reported separately that retail sales rose 0.2% in August, following greater-than-announced activity in July. The data showed broad gains with 10 of the 13 categories increasing sales. Building centers, furniture stores and gas stations were the only places experiencing declines. Gas stations had lower sales because of lower prices. Greater revenue at restaurants and car dealers suggest confidence among consumers, who drive about two-thirds of U.S. economic growth.

In another indication that the U.S. economy lacks the momentum sought by the Federal Reserve, the broadest measure of inflation fell in August – and rose by just 0.2% in the last year. The Bureau of Labor Statistics said lower energy prices, including a 4.1% one-month decline in gasoline, held down the Consumer Price Index. Excluding energy and volatile food prices, the core index rose 1.8% since August 2014. It has not exceeded the Fed’s 2% target for more than three years.

The U.S. housing recovery continued in August as the annual rate of housing starts gained nearly 17% from the year-ago pace, although slowing slightly from July. The Commerce Department said new construction of multi-family houses led the growth from a year ago. The number of houses under construction in August was at its highest pace since 2008. A leading indicator of future construction, building permits accelerated pace more than analysts expected, up 3.5% from July and up 12.5% from August 2014.

The moving four-week average for initial unemployment claims fell for the first time in five weeks, when it hit a 15-year low. Labor Department data suggested that employers remain reluctant to part with their workers. Jobless claims have stayed below long-term averages every week since the beginning of 2013.

Policy makers at the Federal Reserve opted not to raise short-term interest rates yet, citing “recent global economic and financial developments” as possible headwinds to U.S. growth. A survey of the Federal Open Market Committee showed that the majority expect to raise rates at one of the next two committee meetings, scheduled for October and December.

The Conference Board’s August index of leading economic indicators pointed to continued moderate economic growth at least through the end of the year. Weaker numbers for industrial growth offset a recent rise in employment, personal income and business sales. An economist for the business research group had little expectation that the pace of growth would pick up before the year ends.