Demand for workers rose to unprecedented heights in July as employers posted an annual rate of 6.17 million job openings. That was the most since the Bureau of Labor Statistics began measuring employment opportunities in 2000. The number of new hires also hit a record in July but still fell short of openings, as it has each month since the beginning of 2016. Economists point to a mismatch between workers and jobs as a sign that wages could rise and boost consumer activity. 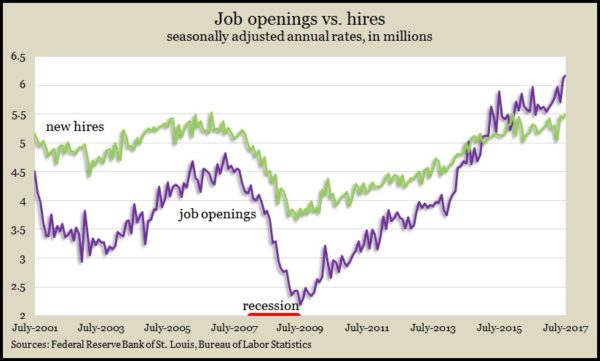 The Bureau of Labor Statistics said wholesale inflation was tame in July, rising just 0.2% from June. Energy led the price increases with a 3.3% rise, the first gain in fuel costs in four months. The Producer Price Index rose 2.4% from July 2016, but the less-volatile core, which excludes costs for food, energy and trade services, stayed at 1.9% for a second month. The core rate remained below the 2% target sought by the Federal Reserve Board.

The broadest measure of inflation stayed below the Fed’s 2% target in July. The Consumer Price Index also showed a rise in energy prices, including a 6.3% increase in gasoline, at least in part because of the hurricanes in the Gulf Coast. The Bureau of Labor Statistics said overall inflation was up 1.9% over the previous 12 months, but the core measure rose 1.7% year-to-year for the fourth month in a row. The core CPI last met the Fed’s target in January.

As a result of hurricanes Harvey and Irma, the moving four-week average for initial unemployment claims surged 11% in the last two weeks, hitting the highest level since December. The average rose above the year-earlier level for the first time since May 2016. However, Labor Department data show the average level of jobless applications still 26% below the 50-year average, a sign that aside from hurricane effects, demand for workers remains elevated.

The Federal Reserve reported that industrial production fell in August, in part because of the effects Hurricane Harvey had on energy production facilities on the Gulf Coast. Manufacturing, mining and utilities all had lower output in August. Likewise, capacity utilization fell for all three industrial segments, sinking to 76.1% usage from 76.9% in July. Utilization, which tends to rise in advance of inflation, thus fell even further below the 45-year average rate of 79.9%, which was last reached in April 2008.

In a sign that companies continue to struggle to keep supplies in closer alignment with demand, business inventories rose 0.2% in July. Sales increased at the same rate, which resulted in no change in the ratio between inventories and sales. The Commerce Department showed the ratio staying about where it was near the end of the recession, suggesting businesses are not as lean and nimble as in years past.

A preliminary reading of consumer sentiment for September fell, in part because of concerns about the hurricanes in Texas and Florida. The University of Michigan reported that consumer assessments of current conditions rose to a 17-year high, but their worries about higher inflation – prompted by higher gas prices following the hurricanes – darken their outlook for the U.S. economy. An economist with the survey said consumers are too resilient for the hurricanes to undermine their confidence for long.