In a sign of consumer reticence, credit card use declined for the second month in a row in July. The Federal Reserve reported that overall consumer credit use declined in July for the first time in 11 months, largely because of a slowdown in student loans.

America’s trade deficit deepened slightly in July, but not as much as analysts had expected. Lower oil prices helped shrink the country’s import total while exports contracted for the third month in a row, a result of the global economic slowdown. The Bureau of Economic Affairs said the trade gap for non-petroleum goods grew by nearly 5%.

Wholesale inventories grew more than forecast while sales declined in July, according to the Commerce Department. The critical inventories-to-sales ratio rose to its highest point since November 2009, suggesting less urgency for businesses to increase production or add workers.

A surge in energy costs sent the Producer Price Index higher than expected in August. The Bureau of Labor Statistics reported a monthly rise in food costs also added to inflation on the wholesale level. The year-to-year core rate, excluding volatile food and fuel costs, stayed at 2.5%, the lowest since June of last year.

The Labor Department said the moving four-week average for initial unemployment claims inched up for the fourth week in a row and the fifth time in six weeks. New jobless applications have stayed below a critical mark since October, but they have struggled throughout 2012 to get much lower.

Inflation at the consumer level stayed below the Fed’s preferred annual rate of 2% in August, according to the Bureau of Labor Statistics. The Consumer Price Index rose 1.9% from August 2011, excluding food and energy prices. The low rate suggests the economy remains weak enough that wholesalers can’t pass all their cost increases along to customers.

Even though credit card use dipped in July, retail spending rose at the highest rate since February, the Commerce Department reported. Higher costs at the gas pumps and continued buying at car dealerships helped fuel sales. Online stores, furniture retailers and home-and-garden centers also were popular.

Further weakness in the global economy resulted in a decline in industrial production and capacity use in August. The Federal Reserve said production output fell for the first time since March, and the use of manufacturing, mining and utility operations dropped to their lowest since November. 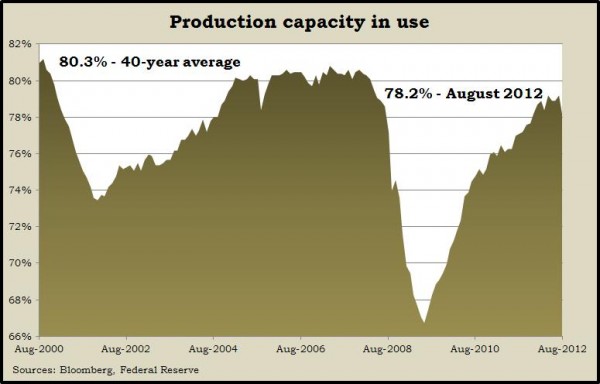