Credit card debt rose at an 11.2% annual rate in July following a slight decline in June. The pace was the fastest in almost two years and a sign of consumer spending confidence. The Federal Reserve said total outstanding consumer credit, including credit cards, student loans and automotive financing, rose at a 6.8% annual pace.

Demand for workers slackened 0.4% in July with 7.2 million job openings posted by employers. According to the Bureau of Labor Statistics, openings have outnumbered job seekers for 17 months in a row, a sign of a mismatch between employer requirements and worker experience. Another indication of the tight labor market is a record number of workers quitting their jobs, presumably confident of landing better opportunities. 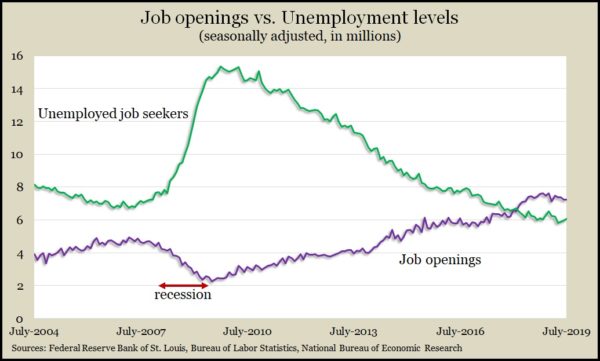 The Bureau of Labor Statistics said wholesale inflation rose 0.1% in August, as costs increased for services more than prices declined for food and energy. The less-volatile core Producer Price Index, excluding costs of food, energy and trade services, rose 0.4% from July and was up 1.9% from August 2018, vs. a year-to-year rate of 1.7% in July.

The four-week moving average for initial unemployment claims declined for the second time in three weeks, continuing to signal that employers are reluctant to let workers go in a tight hiring environment. Labor Department data show the average level of jobless applications 40% below the 52-year average, which it has been under every week for more than six years.

The broadest measure of inflation rose 0.1% in August, led by higher prices for shelter and health care, offsetting a 3.5% drop in gasoline prices. According to the Bureau of Labor Statistics, the core Consumer Price Index, which excludes food and energy prices, rose 2.4% from the year before. It was the biggest year-to-year increase since the Great Recession.

August retail sales rose 0.4%, more than analysts expected, for the sixth gain in a row. According to a Commerce Department report, seven of 13 categories increased sales from July, led by car dealers and building supply centers. Year-to-year, overall sales rose 4.1%, beating the 3.6% pace in July but below the long-term average of 4.3%. Twelve-month movements ranged from a 16% increase for online retailers to a 3.5% decline at electronics and appliance stores.

The University of Michigan said its preliminary consumer sentiment index for September rebounded from a three-year low at the end of August. As in the August survey, consumers expressed concerns about trade wars. Consumers registered their highest expectations for interest rate cuts since February 2009, suggesting that they won’t be surprised if the Federal Reserve decides to lower rates after policy makers meet next week.

The Commerce Department said business inventories rose 0.4% in July while sales gained 0.3%. As a result, the ratio between inventories and sales remained relatively elevated, a sign that companies have been letting supply outpace demand. Year-to-year, inventories grew 4.8%, as opposed to a 1.3% rise in sales.