U.S. consumer debt rose in July for the second month in a row, though it was still $73 billion or 1.7% behind the peak reached in February, the Federal Reserve reported. The rise relied on continued borrowing for automobiles and student finances. However, credit card debt dipped for the fifth month in a row, though at a slower pace. Since its peak in February, so-called revolving credit was down $104 billion or 9.5%. Credit card curtailment can be troubling for an economy that relies heavily on consumer spending. During the Great Recession, credit card debt crested in May 2008 and didn’t recover until January 2018. 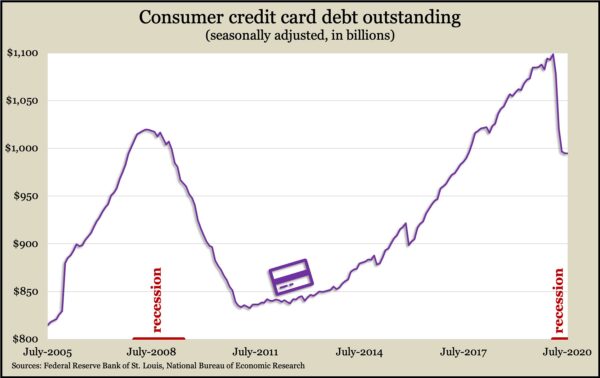 U.S. employers posted 6.6 million job openings in July, an increase of 617,000 or 10.3% as the labor market recovered amid business reopenings from the pandemic. Openings in retail, health care, social service and construction led the July increase. The number of hires declined in July, led by the accommodation and food service industries. The number of workers separated from their jobs increased in July, but that was more because of people quitting their positions and less because of layoffs and discharges.

In a sign that the labor market recovery was losing steam, the four-week moving average for initial unemployment claims declined at a slower rate. It was the 19th time in 20 weeks the average fell but at 970,000 was more than four times its level before the pandemic and more than double the average since 1967. The Labor Department said 29.6 million Americans were receiving jobless benefits, which was up from 1.6 million at the same time last year.

Inflation on the wholesale level continued to rebound in August as the Producer Price Index gained 0.3%, the third increase in four months. Prices for trade services led the gain. Excluding volatile costs for food, energy and trade services, the core PPI also rose 0.3%. Since August 2019, wholesale inflation overall sank 0.2%, the fifth decline in a row, while the core rate rose 0.3%.

The broadest measure of inflation rose 0.4% in August, the third straight increase after three months of declining prices resulting from pandemic shutdowns. Although gains were broad, higher demand for used cars and trucks mostly drove the August increase in the Consumer Price Index. The price of gasoline, shelter, recreation and furniture also had notable gains. Year-to-year, consumer prices rose 1.3%, including a 4.1% increase in the cost of groceries and a 16.8% decline in gas prices. Excluding food and energy prices, the core CPI rose 1.7% from August 2019.