In a possible sign of freer consumer spending, credit card debt rose for the fifth month in a row in July and by the widest margin of the economic recovery. The Federal Reserve reported that overall consumer debt continued growing, led by auto financing and student loans. More importantly, revolving debt, which represents credit card use, continued to increase. Consumer spending drives about two-thirds of U.S. economic activity. 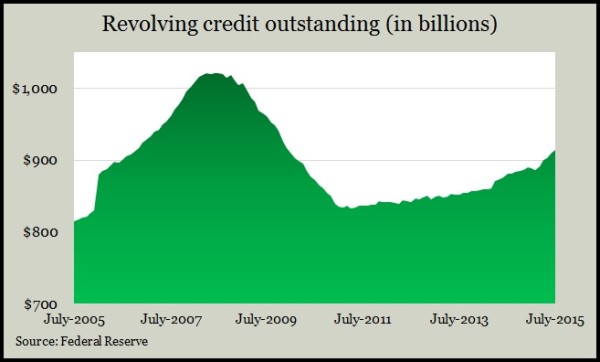 U.S. employers had a record number of job openings in July, as employment prospects continued to improve with the economy. Jobs in professional services, restaurants and retailing led the openings. The Bureau of Labor Statistics said the number of hires declined slightly from June while the rate of workers quitting their jobs – a sign of employee confidence – remained unchanged for the third month in a row.

Wholesale inventories shrank 0.1% in July, even as auto manufacturers contributed to a slight rise in durable goods ready to sell. July sales fell 0.3%, according to the Commerce Department. The result was a higher inventories-to-sales ratio, indicating wholesale operations are not as lean, which could hamstring near-term output and hiring.

In a continued sign of employers’ reluctance to lose workers, the moving four-week average for initial unemployment claims remained below its 48-year average, as it has since the beginning of 2013. The Labor Department reported a slight trend up in claims for the latest four weeks, after hitting the lowest level since April 2000.

Inflation on the wholesale level remained subdued in August, as the Producer Price Index made no change from July, held back by a 3.3% decrease in energy costs. In the last 12 months, the index dropped 0.8%, the seventh decline in a row. Excluding volatile fuel and food prices, wholesale inflation rose 0.7%, still well below the Federal Reserve Board target of 2%.

Despite the 10% stock market correction in recent weeks, “the decline in optimism narrowed,” according to a preliminary September report on consumer sentiment from the University of Michigan. The early read on consumer confidence reflects an underlying belief that the U.S. economy is growing, the Michigan economist said. Global concerns may be tempering consumer expectations, Richard Curtin said, by higher employment and lower prices should help sustain spending in the year ahead.