The U.S. services sector continued expanding in September, according to the Institute for Supply Management. The trade group’s services index showed the fourth consecutive month of growth following setbacks in April and May. Expansion accelerated from the August index. Purchase managers surveyed expressed optimism for business conditions and the economy while uncertainty lingered over the COVID-19 pandemic.

The U.S. trade deficit grew 5.9% in August to its widest gap since 2006. The $67.1 billion deficit, which detracts from gross domestic product, resulted from the value of imports rising at a faster rate than exports. Imports were up 3.2%, while exports rose 2.2%. The U.S. trade surplus in services fell to its lowest level in nine year as the global pandemic continued to curtail spending in other countries on U.S.-based travel and tourism.

Recovery in the demand for workers suffered a setback in August as employers listed 3% fewer job openings than in July, according to the Bureau of Labor Statistics. Openings dropped below 6.5 million after reaching nearly 6.7 million in July. August openings were 9.3% below where they were the year before. The number of hires rose 0.3% from July, boosted by temporary positions for Census workers. A positive sign for the labor markets was a 7.9% decline in the number of workers being separated from their jobs, whether by layoffs, dismissals or voluntary quits. Quits, an indicator of worker confidence, edged down. A wide gap continued between the number of job openings and the number of people looking for work. 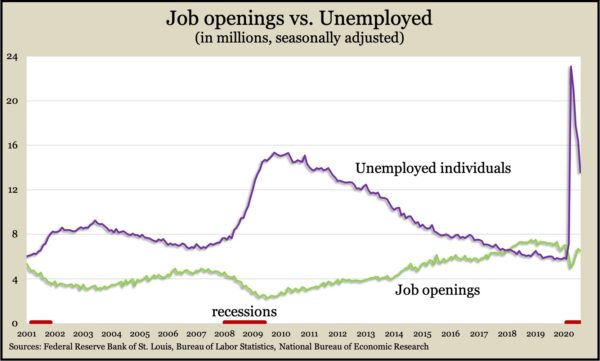 The Federal Reserve reported that consumer credit outstanding contracted at an annual rate of 2.1% in August. Most notably, revolving credit, which reflects consumer credit card debt, shrank at a pace of 11.3%, sinking to the lowest level since June 2017. Credit card debt declined for the sixth month in a row and at a steeper rate than in the previous two months, suggesting consumers are wary of spending. Consumer spending drives about two-thirds of U.S. economic activity. 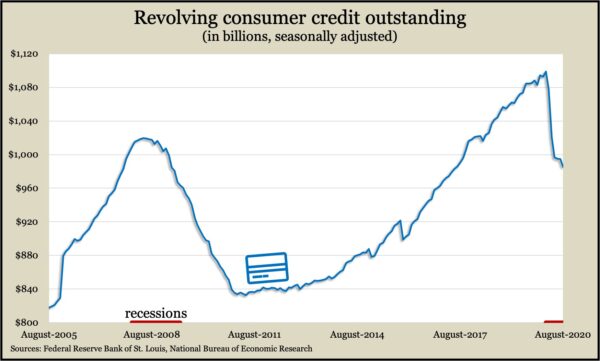 The four-week moving average for initial unemployment claims receded to 857,000 after reaching a record 5.8 million in April. Average claims are up from a 50-year low of 208,000 in February as well as the pre-pandemic high of 695,000. The Labor Department said 25.5 million Americans were receiving unemployment benefits, up from 1.4 million the year before.