The Institute for Supply Management reported a decline in its non-manufacturing index in September. New orders and business activity slowed, according to purchase managers, but the index overall suggested the 68th consecutive month of expansion in a large sector that reflects continued growth in the domestic economy. Although the index fell more than analysts expected, it remained above its 12-month average and was coming off strong readings in July and August.

The U.S. trade deficit widened by 15.5% in August, as exports fell to their lowest level in nearly three years. Data from the Bureau of Economic Analysis underscored the cumulative effects of slower global growth and the strong U.S. dollar. Oil imports sunk to their lowest point since 2004. Sales of iPhones, which count as imports from China, raised the U.S. deficit with that country by 14%. 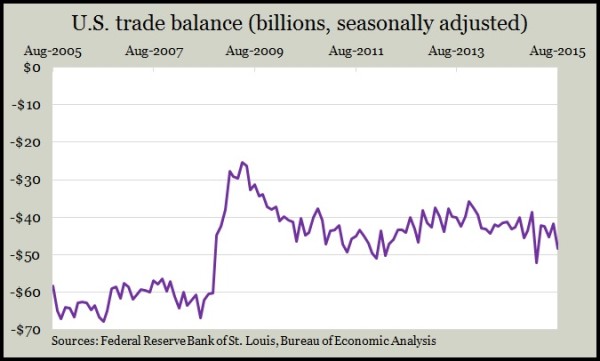 Consumer borrowing increased at an annual rate of 5.6% in August, slower than June and July. The Federal Reserve reported a $16 billion gain in consumer credit. Borrowing was fueled again mostly by gains in student loans and automotive financing. But for the sixth month in a row, credit card borrowing increased, suggesting continued confidence among consumers, whose spending drives about two-thirds of the U.S. gross domestic product.

After falling four weeks in a row, the moving four-week average for initial unemployment claims edged closer to its 15-year low, set in August. Data from the Department of Labor showed average claims staying below the 48-year average each week since the beginning of 2013. That suggests persistent reluctance by employers to let workers go, which strengthens the hiring market.

Wholesale inventories and sales moved in opposite directions in August, with inventories up 0.1% and sales down 1%, the Commerce Department reported. That resulted in the inventories-to-sales ratio rising to its highest level since the recession, suggesting that supply is outpacing demand.