Rebounding from an unexpected contraction in August, the ISM manufacturing index exceeded its 12-month average growth rate in September. Components for new orders, production and exports rose while employment contracted at a lower pace than in August or July, Overall, the gauge from the Institute for Supply Management suggested that a lagging part of the U.S. economy isn’t as weak it appeared a month earlier.

The Commerce Department reported that construction spending slowed in August, falling short of analyst projections for what has been a bright spot in the economy lately. In particular, the housing recovery appeared to suffer a setback with single-family residential spending declining for the fourth month in a row. Through the first eight months of 2016, construction spending overall outpaced year-earlier expenditures by 4.9%, but a lack of private-sector investments remained evident in lower spending for manufacturing and commercial construction.

Consumer spending, which drives more than two-thirds of economic growth, showed more life as motor vehicle sales reached a higher-than-expected annual rate of 17.8 million vehicles in September. Estimates from AutoData Corp. showed a 4.5% increase from August’s rate, although it was 1.6% slower than in September 2015. Cheaper gas prices helped boost truck sales more than cars, and the strong dollar resulted in higher growth of imported vehicles.

In another read on manufacturing’s health, U.S. factory orders rose in August for the second month in a row. Year-to-year orders declined 2.6%, according to the Commerce Department, and the less-volatile orders that exclude transportation equipment fell 3.2% from August 2015. Orders for non-defense capital goods excluding aircraft – a proxy for business investments – made its third consecutive monthly gain, though it was down 4% from the same time last year. Smoothing out the indicator with a three-month rolling average shows how business investments have slackened over the last couple of years. 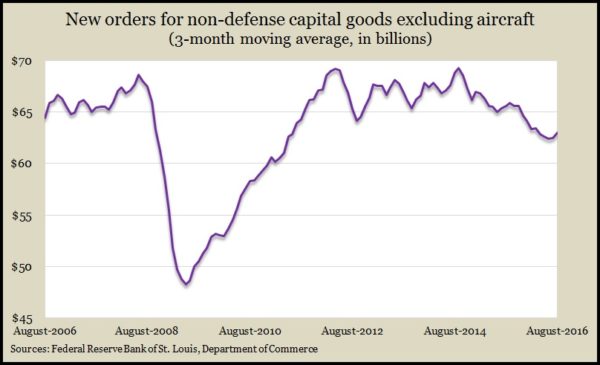 The U.S. trade deficit widened more than analysts expected in August. The trade gap grew by 3% to $40.7 billion, according to the Bureau of Economic Analysis. Exports, which have been hampered by global stagnation and the strong dollar, rose 0.8% from July. Imports grew 1.1%, suggesting the relative strength of the U.S. economy as Americans spent more on overseas goods and services, including fees for the Olympic games in Rio de Janeiro.

The Institute for Supply Management’s non-manufacturing index also revived more than expected in September. Purchasing managers from the largest segment of the U.S. economy said their companies were expanding for the 80th consecutive month. The only concerns they expressed were over geopolitical uncertainty and the presidential elections.

The four-week moving average for initial unemployment claims fell for the seventh week in a row, hitting the lowest rate in nearly 43 years. According to the Department of Labor, weekly claims stayed below 300,000 applications for the 83rd consecutive week, which hasn’t been done since 1970. Low claims suggest employers continue to be reluctant to let workers go, which fortifies the employment market.

Employers added fewer jobs than expected in September and at a slower pace than in recent months. The Bureau of Labor Statistics reported a 156,000 gain in jobs, with notable increases in health care, restaurants and professional services. The average workweek added several minutes, and the average wage rose 2.6% since September 2015, higher than recent comparisons and more than twice the rate of inflation. The unemployment rate rose to 5% after three months at 4.9% as more jobseekers who had been on the sidelines resumed their search for work.

The Commerce Department said wholesale inventories dipped in August, suggesting companies are trying to narrow supplies again after letting stockpiles outstrip overall demand. In the last 12 months, inventories declined 0.1% while sales grew 0.6%, meaning businesses are operating more leanly than they have in months.