Signs of the housing recovery picked up in September with pending home sales advancing over year-ago numbers for the first time in 11 months. The National Association of Realtors said historically low mortgage rates, sustained inventory levels and moderating price gains are helping sales, but strict lending rules remain a challenge.

House price increases continued to moderate in August, according to the S&P/Case-Shiller index. The 12-month price gain in the 20-city composite index decelerated to 5.6% after reaching a peak of 13.8% last November. It was the lowest year-to-year increase in nearly two years. Although the trend is tapering, housing prices have been recovering since June 2012. 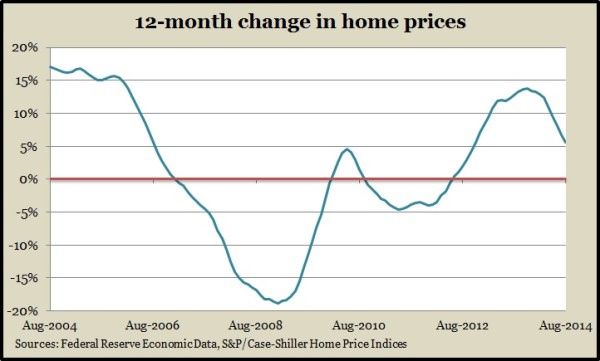 The Conference Board said consumer confidence rose in October to its highest point in seven years, before the Great Recession. The business research group reported that consumers felt better about both current conditions and future outlook, lifted in part by improved employment conditions. Economists consider confidence a precursor to consumer spending, which generates about 70% of economic growth.

After its regular two-day meeting, the Federal Open Market Committee – the policy-making panel of the Federal Reserve Board – announced that the economy is growing on its own enough to let the Fed end its third quantitative easing stimulus program. The Fed maintained its expectation that it would keep short-term interest rates near zero “for a considerable time.”

Underscoring the Fed’s confidence in economic growth, the Bureau of Economic Analysis reported that gross domestic product (GDP) rose at an annual rate of 3.5% in the third quarter. The expansion was stronger than analysts expected and capped the highest six-month growth rate since the end of 2003. Consumer spending increased at 1.8% in the third quarter, down from 2.5% in the second quarter. Higher numbers for exports, business investments and military spending contributed to the expansion. The Fed’s favorite inflation gauge showed a 1.2% annual increase, still below the Fed’s 2% target.

The moving four-week average for initial unemployment claims dropped for the seventh week in a row, reaching the lowest level since May 2000, according to the Labor Department. Employers appear to remain reluctant to downsize their work forces. The moving average smooths out weekly volatility and has stayed below the 47-year average every week for the past 22 months.

A monthly update on some of the data contained in the quarterly GDP report showed personal income and spending weaker than expected in September. Income rose 0.2% and spending actually dipped 0.2%, the Bureau of Economic Analysis said. Lower gasoline prices help explain the decline in expenses. The personal saving rate grew to 5.6% of disposable income, up from 5.4% in August. Inflation rose 1.4% since September 2013.