Housing remained a bright spot in the economic recovery, despite a 3.5% drop in the annual rate of new home sales in September. The Commerce Department reported the measure’s first setback since April, but it was down from the August pace, which was the highest since December 2006. The supply of new houses for sale continued to suggest the current sales pace isn’t sustainable, with just 3.6 months’ worth of inventory on the market.

Limited supply and ongoing demand continued to accelerate the year-to-year increase in residential prices in August, according to the S&P CoreLogic Case-Shiller home price index. The 20-city composite index rose by 5.2%, up from 4.1% in July and the biggest gain in two years. A price acceleration that began in August 2019 slowed down only in April, May and June for the pandemic-induced recession.

The Conference Board said its consumer confidence index slipped in September on lower outlook for job prospects. The business research group said a resurgence in COVID-19 cases and the weakened labor market should dampen consumer optimism through the end of the year.

The U.S. economy rose at a record annual pace of 33.1% in the third quarter, bouncing back from a record drop of 31.4% in the second quarter. Although the rebound was steep, the value of real gross domestic product remained down $427 billion or 2.2% from its level in the first quarter; it was 3.5% behind the peak at the end of 2019, according to data from the Bureau of Economic Analysis. Consumer spending led the third-quarter comeback, rising at an annual rate of 40.7% following the 33.2% pace of decline in the second quarter. Consumption expanded as Americans received medical services, ate out and bought cars, clothes and footwear. 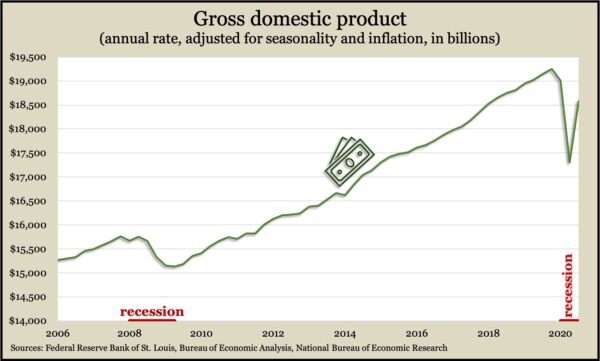 The four-week moving average for initial unemployment claims fell for the 26th time in 27 weeks but remained above the pre-pandemic record and more than double the 53-year average. The Labor Department said 22.7 million Americans claimed jobless benefits in the latest week, up from 1.4 million the year before.

The National Association of Realtors said its index of pending home sales fell 2.2% in September, the first decline in five months. The trade group didn’t explain the drop in contract signings but noted that they were up 20.5% from the year before. Citing low mortgage rates and rising demand pushed by working from home, the Realtors said they expect home sales to keep climbing through at least the end of the year.

The Bureau of Economic Analysis said consumer spending—which drives more than two-thirds of economic activity—rose 1.4% in September, its fifth increase in a row and up from a 1% gain in August. Spending was within 2% of its peak in January and about the level reached back in June 2019. Personal income rose just 0.9% for the month, reducing the personal saving rate to 14.3% of disposable income, but that’s up from an 8.8% average since 1959. The Federal Reserve’s favorite measure of inflation rose 1.5% from September 2019, up from 1.4% in August but still below the Fed target of 2%.

Consumer optimism remained relatively unchanged in October, according to the University of Michigan consumer sentiment index. An economist with the longstanding survey said underlying “fear and loathing” made sentiment appear deceptively stable. He said fear of the coronavirus and loathing of extreme partisanship would impact consumers’ willingness long after the Nov. 3 elections.