The annual rate of new homes sold hit a 10-month low in September. The Commerce Department also reported that the sales rate in August was lower than previously estimated. The median sales price rose 13.5% from the year before, which could be discouraging more home buying. Housing data can be volatile, but along with recent reports of fewer building permit issued, more signs point to a slowdown in the housing recovery.

The Commerce Department said durable goods orders dropped off in September for the second month in a row. Stripping out the wildly fluctuating transportation sector, orders still declined – and by more than analysts expected. They were down 5.3% from September 2014. Orders for non-military capital goods excluding aircraft, a proxy for business equipment investments, also fell, suggesting caution by companies amid weakening global demand.

House price increases shot up in August, according to the S&P/Case-Shiller index. The 12-month price gain in the 20-city composite index rose to 5.1% from 4.9% in July. All of the cities in the index had year-to-year price gains; 15 at faster paces than in July. Overall, the price index is back to where it was before the Great Recession, up 36% from its 2012 low but still 13% short of its 2006 peak.

The Conference Board said consumer confidence backpedaled in October, though it’s still relatively upbeat. Consumers weren’t as high on current conditions as their opinions soured a bit on the availability of jobs, the chief determinant of consumer optimism. Expectations for the next six months also fell a little, suggesting little confidence that the economy will improve much in the near term.

After its regular two-day meeting, the Federal Open Market Committee – the policy-making panel of the Federal Reserve Board – announced it will not yet increase short-term interest rates, which have been near nil for almost seven years. One of the reasons the Fed is dragging its feet on normalizing interest rates is that inflation remains out of sight. One year earlier, the Fed announced the closing of its third quantitative easing stimulus program. 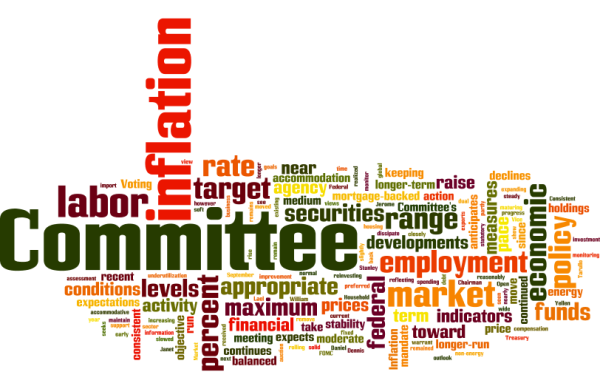 (The Fed’s statement via computer-generated word cloud. Words show more or less prominently, depending on how frequently they occurred in the announcement.)

Signs of the housing recovery picked up in September with pending home sales advancing over year-ago numbers for the first time in 11 months. The National Association of Realtors said historically low mortgage rates, sustained inventory levels and moderating price gains are helping sales, but strict lending rules remain a challenge.

Confirming the Fed’s remarks about tepid economic growth, the Bureau of Economic Analysis reported that gross domestic product (GDP) rose at an annual rate of 1.5% in the third quarter, which was lower than analysts expected and down from 3.9% in the second quarter. A slowdown in inventories dragged down GDP growth as businesses adjusted to weakening demand, especially from customers abroad. Consumer spending increased 3.2%. And the Fed’s favorite inflation gauge slowed to a 1.2% annual gain, below the Fed’s 2% target.

The moving four-week average for initial unemployment claims dropped for the seventh week in a row, reaching the lowest level since December 1973, according to the Labor Department. Employers continue to send signs that they’re reluctant to downsize their work forces. The moving average smooths out weekly volatility and has stayed below the 48-year average every week for the past 34 months.

A monthly update on some of the data contained in the quarterly GDP report showed personal income and spending weaker than expected in September. Income rose 0.1% with a slight setback from August in wages and income, and spending picked up 0.1%, the smallest gain since January. Year-to-year, income outpaced spending for the second month in a row, raising the personal saving rate to 4.8% of disposable income, the Bureau of Economic Analysis said. The Fed’s favorite measure of inflation showed a 1.3% rise since September 2014, still shy of the agency’s 2% target.

Although declining slightly from its mid-month reading, disappointing analysts, consumer sentiment rose in October, according to the University of Michigan. An economist with the survey said so far this year, average sentiment is at its highest level since 2004. The summer swoon in stocks has made little difference to overall optimism, the economist said, and financial expectations are the highest since 2007.