The year-to-year increase in residential prices rose to a fifth consecutive all-time high in August. The S&P CoreLogic Case-Shiller national home price index rose 19.8% from August 2020, the most in 33 years of data. It was up marginally from the July increase, suggesting that strong housing gains might be starting to slow. An imbalance between limited supply and steady demand has been driving prices higher. Except for May 2020, the annual price gain has been accelerating every month since September 2019, when the year-to-year increase was 3.2%. Housing prices have far outpaced inflation overall. 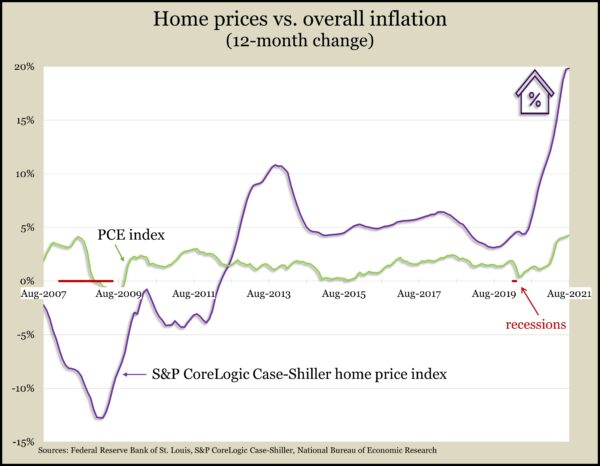 The annual rate of new home sales rose 14% in September to their highest level in six months, the Commerce Department reported. The volatile indicator recovered from three months below the pre-pandemic level. According to Commerce estimates, the median price for a new house reached a record $408,800 in September, up 19% from the year before as inventory dipped to 5.7 months, the lowest since May. Only 26% of the houses sold were completely built, down from 39% for all of 2019.

The Conference Board said its consumer confidence index rose in October for the first time in four months. The business research group credited easing fears from the delta variant of COVID-19 for boosting consumers’ plans to buy houses, cars and appliances in coming months. Confidence muted a 13-year high of short-term expectations for inflation.

Demand for long-lasting manufactured products declined 0.4% in September, the first setback in five months. The Commerce Department said durable goods orders through the first nine months of 2021 were up 23.4% from the same time in 2020. But, as an indication of the imbalance between demand and supply amid logistic bottlenecks, shipments of durable goods through September were up only 13.6% from the year before. Core capital goods orders, a proxy for business investment, rose 0.8% from August and were up 16% from September 2020.

The U.S. economy rose at an annual pace of 2% in the third quarter, slower than expected and down from 6.7% in the April-through-June period. Adjusted for inflation, gross domestic product reached a record $19.5 trillion and was up 1.4% from the peak prior to the 2020 recession, according to the Bureau of Economic Analysis. Economic growth was led by consumer spending, which generates about 70% of economic activity and advanced at a 1.6% annual pace, down from a 12% clip in the second quarter. The Federal Reserve Board’s preferred measure of inflation rose 4.3% from the third quarter of 2020, up from 3.9% in the second quarter and 1.8% in the first. 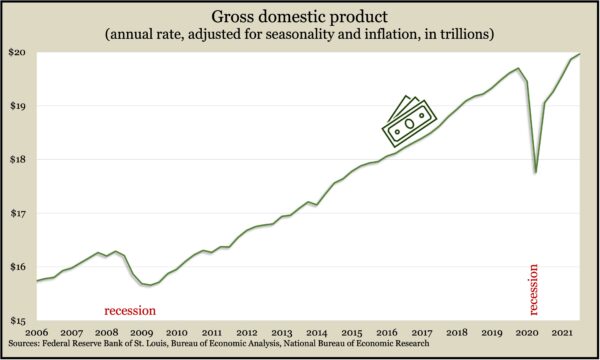 The four-week moving average for initial unemployment claims fell for the third week in a row, dropping to its lowest point since widespread shutdowns from the pandemic. The Labor Department reported the new-claim average fell below 300,000, down from 5.3 million in April 2020 and 20% below the 54-year average. In the latest week, 2.8 million Americans claimed jobless benefits, down 14% from the week before, as hundreds of thousands continued to clear out of expiring pandemic relief programs.

The National Association of Realtors said its index of pending home sales fell 2.3% in September. The trade group’s index was down 8% from the year before. An economist for the Realtors  cited a seasonal lull for the pullback in demand but said rising mortgage rates and rents should fuel further home-buying in 2022. The group forecast a 6.4% rise in home sales in 2021 and a 1.7% decline in 2022, saying the slowdown should ease overall price increases to 2.8% in 2022 from 14.7% in 2021.

The Bureau of Economic Analysis said consumer spending rose 0.6% in September, even as personal income declined 1% with the expiration of pandemic relief programs for dislocated workers. The personal saving rate continued to fall, dropping to 7.5% of disposable income in September, after reaching as high as 26.6% in March. The personal consumption expenditures index, which the Fed follows for inflation, rose 0.3% from August, half the monthly increase in March and April. But a 12-month gain of 4.4% for the index was the highest since January 1991.

Often a pre-cursor to spending, consumer sentiment declined in October, according to a longstanding survey from the University of Michigan. The sentiment index reading fell to 71.7 from 72.8 in September and 81.8 in October 2020. It was a smidge below the nadir in April 2020. Uncertainty about year-ahead inflation reached its highest level in 40 years of surveys. Fear of inflation and lower confidence in the government offset expectations for income and the hope that COVID-19 is receding. A University of Michigan economist said weaker resistance to higher prices by both consumers and businesses could fan inflation in the next year.