A bumpy but encouraging contributor to U.S. economic growth lately has been the housing market. Prices are nearly back to the peak they reached 10 years ago, according to August data from the S&P CoreLogic Case-Shiller index. The year-to-year 5.2% increase in the 20-city composite index is consistent with home price advances over the last two years. A housing economist with S&P said overall housing values have recovered better than stocks.

The Commerce Department reported lower-than-expected new home sales in September. The annual rate of 593,000 houses sold rose 3% from the August rate and was 29% of the year-ago pace. Sales remain about where they were before the 2008 financial collapse but are 9% below the 53-year average rate. A low inventory of new houses for sale continued to push up prices. 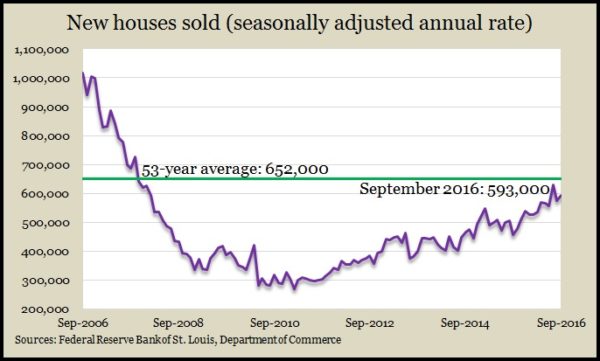 Separately, the Commerce Department reported that durable goods orders declined slightly in September, although excluding volatile demand for transportation equipment showed a third consecutive gain. Manufacturing has been dogged by effects from a strong dollar and cheap oil globally. Non-defense capital goods orders excluding aircraft – a proxy for business investment – dipped again in September and remains down 3.9% from the year before.

The moving four-week average for initial unemployment claims rose for the second week in a row after reaching its lowest level since November 1973.  Labor Department data show jobless applications below the 49-year average level every week since early 2013, a sign that employers remain reluctant to let workers go, which should boost wages and consumer spending.

The National Association of Realtors cited rising wages among the catalysts for the housing market as its pending home sales index rose 1.5% in September, beating analyst forecasts. While existing home sales have been relatively flat – limited in part by low inventory – the trade association’s index suggests the pace should start picking up again.

The U.S. economy grew at a 2.9% annual pace in the third quarter, the fastest in two years, the Bureau of Economic Analysis said. Gross Domestic Product benefited from steady consumer spending, increased exports and a renewed buildup of business inventories. The preliminary data also suggested increased business investments for the second quarter in a row. The Fed Reserve’s favorite inflation gauge rose to 1.7%, the highest in two year but still below the 2% mark preferred by the central bank.

Considered a leading indicator of consumer spending, The University Michigan consumer sentiment index declined in October. The index dropped to a reading of 87.2 from 91.2 in September. A university economist said temporary uncertainty sown by the election may be raising consumer concerns about a possible downturn in the next five years. Sentiment remains at pre-recession levels.