The annual rate of new-home sales rose in September to its highest level since the federal tax credit stimulus in April 2010. The Commerce Department reported the rate gained 5.7% gain from August and 27% from the year before. The supply of newly built houses dropped to a seven-year low, helping to push up the median house price by nearly 12% from September 2011. The report gave further evidence of gaining strength in the sector most responsible for the Great Recession. 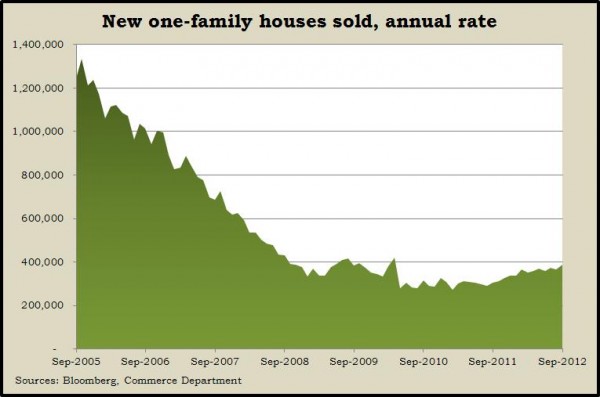 The four-week moving average of initial unemployment claims dipped for the second week in a row, though it stayed lower than levels in September, according to the Labor Department. A   leading indicator of hiring trends, the average has been below the critical 400,000-claim level for 52 weeks, but it hasn’t made significant improvements.

Contracts for existing home sales rose slightly in September and registered the 17th consecutive year-to-year increase in commitments, the National Association of Realtors reported. The trade group forecast “minor movement” of existing houses in the near term with continued recovery of the market at least through next year.

U.S. economic growth gained pace slightly in the third quarter, moving to an annual rate of 2% from 1.3% in the second quarter, according to an advanced estimate from the Bureau of Economic Analysis. The Gross Domestic Product was aided by a pickup in consumer spending as well as residential investments and military expenditures. Lagging behind were exports, business investments and spending by state and local governments.

Analysts cited rising home values, continued hiring and lower gas prices for helping to boost consumer sentiment in October. According to the University of Michigan and Thomson Reuters, survey respondents expressed the brightest outlook for financial and economic prospects in five years.