The National Association of Realtors said the pace of existing home sales sank 2.2% in September, although it ran 3.9% ahead of the year-ago pace. Sales declined to 5.38 million houses and condos at a seasonally adjusted annual rate. An economist for the trade group said low mortgage rates haven’t been enough to improve sales because low supplies of houses for sale have been pushing up prices. The median sales price rose 5.9% from September 2018, the 91st consecutive month of year-to-year increases.

The Commerce Department reported that new home sales slowed in September. The annual sales rate of 701,000 houses declined 2.2% from the August pace and marked the second setback since hitting a post-recession peak of 729,000 in June. Figures showed the number of new houses for sale shrank for the ninth month in a row, further limiting inventory available for the nation’s housing market. 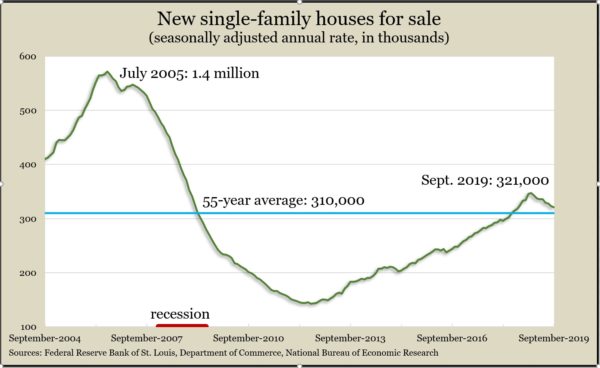 The four-week moving average of initial unemployment claims fell for the first time in four weeks, remaining near the lowest levels in 50 years. Average jobless applications were 39% below the 52-year average, according to data from the Labor Department. The data provide a persistent sign that employers have been reluctant to let workers go. Tight hiring conditions have been pushing up wages, which should encourage more consumer spending.

The Commerce Department said durable goods orders sank 1.1% in September, mostly because of a drop-off in demand for commercial aircraft and automobiles. Excluding volatile requests for transportation equipment, orders still declined 0.3% and were up only 0.8% from September 2018. Non-defense capital goods orders excluding aircraft—a proxy for business investment—fell for the second month in a row and were up 1% from the same time last year.

Considered a leading indicator of consumer spending, the University Michigan consumer sentiment index fell in October but continued to suggest a “prevailing optimism” reflecting recent years of confidence in job prospects and personal income. An economist with the survey said consumer expectations for prices and interest rates have moderated their spending, which enables them to afford to continue to spend and thus to extend the record economic expansion.