The U.S. housing recovery may be slowing, according to a decline in the annual rate of existing homes sold in September. The National Association of Realtors said sales declined 1.9% from the August rate, although they remained 10.6% ahead of the year-ago pace. Affordability is at a five-year low, but low inventories of houses for sale have dampened the market. Meanwhile, the mismatch between supply and demand helped push the median sale price 11.7% higher than September 2012, marking the 27th month in a row of year-to-year price gains.

Employers added 148,000 jobs in September, lower than expected and below the 185,000 monthly average since September 2012. The Bureau of Labor Statistics said construction, wholesale trade and transportation companies continued growing their payroll counts while food service and temporary employment also trended up. The unemployment rate slipped to 7.2%, the lowest in nearly five years. The number of Americans saying they’re employed rose, and those considered only marginally attached to the labor force declined. 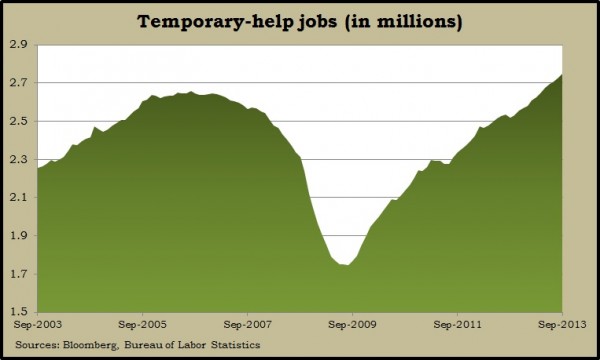 The moving four-week average for initial unemployment claims rose for the fourth week in a row, the Labor Department reported. Levels bloated at least in part from backlog issues in California and indirect effects of the 16-day federal shutdown. The moving average – which smooths out weekly volatility – has stayed below the 46-year average every week so far this year, suggesting employers are reluctant to downsize their work forces.

The U.S. trade deficit widened slightly in August, although not as much as analysts had anticipated. The Bureau of Economic Analysis said imports remained unchanged while exports decreased by 0.1%. Flat imports suggest stagnation in domestic consumer spending, although business spending on capital equipment from abroad increased. The three-month rolling average trade gap reached its narrowest point since December 2009.

Wholesale inventories rose more than expected in August, according to a separate Commerce report, posting the biggest gain since January. But inventories didn’t quite keep up with sales, suggesting companies are staying lean and not stockpiling too much merchandise before it’s sold.

The University of Michigan/Reuters Thomson consumer sentiment survey showed confidence in the U.S. economy dropped for a third straight month in October. Sentiment toward current conditions remained relatively high, but attitudes about financial situations six months out sank to a two-year low.