The U.S. housing recovery showed signs of life in September, with the highest annual pace of existing homes sold so far this year. The National Association of Realtors said sales rose 2.4% from the August rate, although they were down 1.7% from the year-ago pace. Low interest rates, moderating price gains and less competition from investors may be improving conditions for traditional home buyers. Expect the inventory of homes for sale to start shrinking, though, as it typically does as winter nears.

The Federal Reserve Board got another reason to take its time raising interest rates, as the broadest measure of inflation indicated continued sluggish economic growth in September. The Consumer Price Index rose just 0.1% from August, held back by energy costs, which have dipped three months in a row. The Bureau of Labor Statistics reported that year-to-year inflation rose 1.7%, nearly half the long-term average and still below the Fed’s target of 2%. 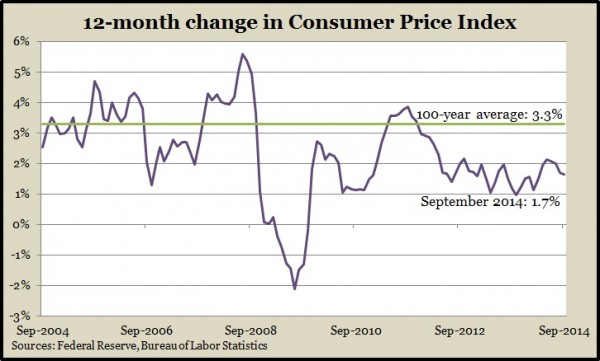 The Conference Board’s Leading Economic Indicators rose more than analysts expected in September. The business research group found broad evidence suggesting continued moderate expansion at least through yearend. It cited recent jobs gains and prospects for income growth as positives for the economy with a weaker housing recovery as a hurdle.

The moving four-week average for initial unemployment claims dropped to its lowest level since May 2000. The average has fallen six weeks in a row and has remained below the 47-year average since the beginning of 2013, according to Labor Department data. The persistent low readings suggest employers are reluctant to downsize their work forces.

As another sign of vitality in the housing recovery, the Commerce Department reported that September sales of new houses rose to their highest annual pace since July 2008, before the financial collapse. August sales were lower than initially estimated, but September sales accelerated and climbed 17% from the year-ago pace. The median sales price fell 0.4% from September 2013.