American builders started making more houses in September than any month but June since the recession ended, according to the Department of Commerce. Housing starts were on a 1.2 million unit annual pace, up 6.5% from August and 17.5% above the year-ago rate. The same report shows an unexpected dip in building permits, down 5% from the August pace but still up 4.7% from September 2014. Fewer permits suggests a coming slowdown in the housing recovery.

The decline in building permits, along with recent weakness in the S&P 500 stock index and lower manufacturing output brought down the Conference Board’s Leading Economic Indicators for September. The business research group said despite the setback, gains in consumer expectations, the spread in interest rates and low levels of jobless claims suggest continued moderate economic growth in coming quarters. Even with hampered expansions globally, the Conference Board forecast U.S. GDP growth at an annual rate of 2.5%.

The U.S. housing recovery showed more vitality in September, with the second-highest rate of existing homes sold since February 2007. The National Association of Realtors said sales rose 4.7% from the August pace and were up 8.8% from the year-ago rate. Sub-4% mortgage rates, moderating price increases and pent-up demand are fueling the sales trend, the trade group said, but a lack of inventory and too few first-time buyers could stall future sales. 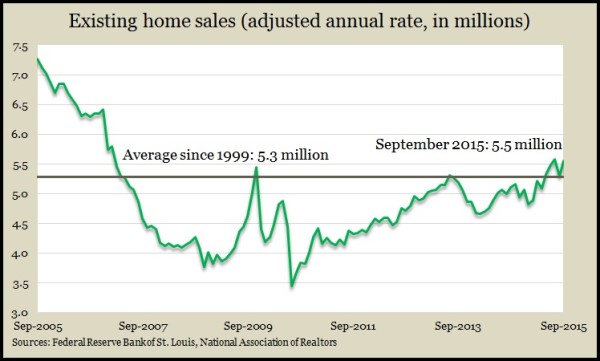 The moving four-week average for initial unemployment claims dropped to its lowest level since December 1973. The average fell for the sixth week in a row and has remained below the 48-year average since the beginning of 2013, according to Labor Department data. The persistently low applications suggest employers remain reluctant to downsize their work forces.

Where Markets Closed for the Week